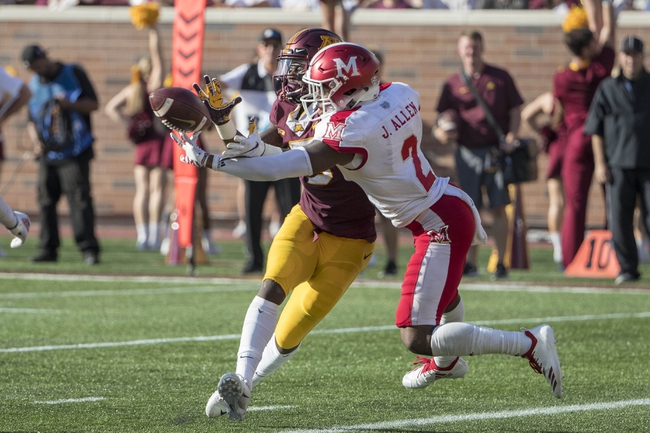 The Western Michigan Broncos will face off against the Miami RedHawks in college football action from Yager Stadium on Saturday.

The Broncos come into this game with a 2-2 record so far. After opening losses versus Syracuse 55-42 and Michigan 49-3, Western Michigan took out Del State 68-0 and Georgia State 34-15.

In the Georgia State game, WMU quarterback Jon Wassink logged 234 yards and three scores, most of the work going to Jayden Reed who had 101 yards and a TD on seven grabs. Jamari Bogan and LeVante Bellamy combined for 247 yards and a TD on the ground for the Broncos.

Over on the Miami side, they’re sitting at 1-3 on the season. The RedHawks posted an opening loss to Marshall 35-28, then Cincinnati 21-0 and Minnesota 26-3 before taking out Bowling green 38-23.

In the Bowling Green game, Miami QB Gus Ragland managed 119 yards and two touchdowns, while Alonzo Smith put up 164 yards on 19 carries. Jack Sorenson was the top RedHawks receiver with 72 yards and a score on six grabs.

Aside from the Michigan game no one expected them to get close in, The Broncos have put up three solid offensive efforts, most notably hanging with a pretty good Syracuse team in the opener.

As for Miami, they hit the skids with just three points in a two-game span, but should glean some confidence after the Bowling green victory. That said, Western Michigan’s offensive potential seems a little more consistent—not to mention potent—so I’m going to go with the Broncos for a cover here.