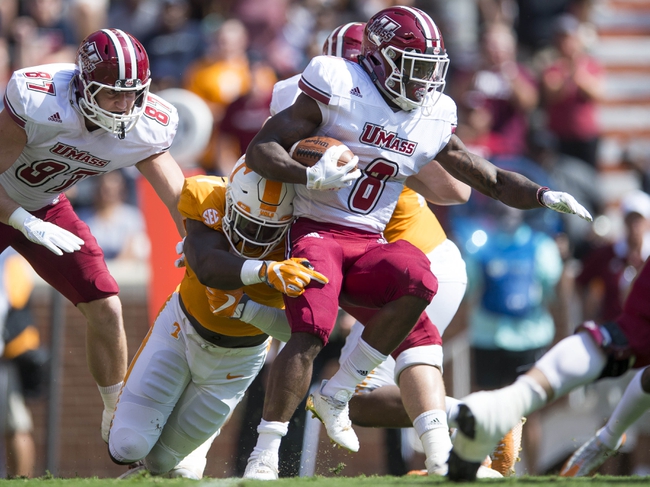 The UMASS Minutemen and the Ohio Bobcats meet in week 5 college football action from Peden Stadium in Athens, Ohio on Saturday afternoon.

The UMASS Minutemen will look to get back to .500 after snapping a three game losing streak with a 49-31 win over Charlotte in their last outing. Andrew Ford leads the Minutemen with 460 passing yards but is sidelined with an injury. Michael Curtis has thrown for 373 yards, 3 touchdowns and 2 picks in relief, while Marquis Young leads UMASS with 326 rushing yards and 4 touchdowns. Andy Isabella leads the Minutemen in receiving with 449 yards and 4 touchdowns coming on 28 catches. As a team, UMASS is averaging 393.4 yards of total offense to go along with 34 points per game this season.

The Ohio Bobcats will look to bounce back and get to .500 after back-to-back losses, including a 34-30 loss to Cincinnati in their last outing. Nathan Rourke has thrown for 468 yards on 45.5% passing with 3 touchdowns and a pick this season while A.J. Ouellette leads the Bobcats in rushing with 164 yards with Maleek Irons and the aforementioned Rourke right behind with 159 yards and 153 yards respectively. Papi White leads Ohio in receiving with 308 receiving yards, 16 receptions and a pair of touchdowns this season. As a team, Ohio is averaging 400.3 yards of total offense to go along with 33 points per game this season.

UMASS had a solid win over Charlotte, but that doesn’t change the fact that the Minutemen are on their 3rd quarterback right now, while Ohio has hung around with some decent opposition like Virginia and Cincinnati, hanging 30 or more on both of them and scoring 30+ in all three of their games this season. The Bobcats are a much better team at home than on the road, especially out of conference, and I think this is a game that the Bobcats can win by two touchdowns, so I'll lay the points with Ohio here.