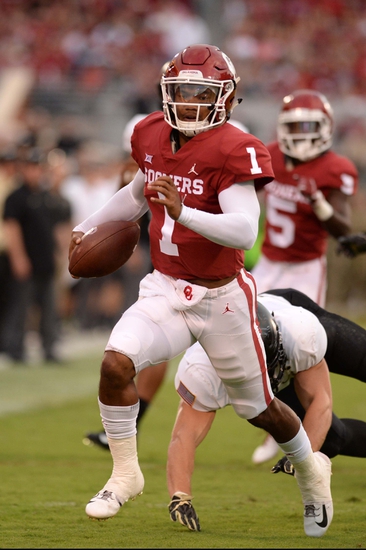 The Baylor Bears will travel to Memorial Stadium (Norman, OK) to take on the 6th ranked Oklahoma Sooners this upcoming Saturday in College Football action.

The 6th ranked Oklahoma Sooners had all they could handle from the Army Black Knights, however, improved to 4-0 on the season after defeating Army 28-21 in OT. Army did a great job of keeping the Oklahoma offense off the field as they held possession of the ball for about 75% of the game, however, the Sooners we’re able to avoid the upset after intercepting a 4th down pass by Army’s Kelvin Hopkins in OT. Oklahoma was outgained by Army by a 379-355 margin however, did win the turnover battle by a 2-1 margin. Leading the way for the Sooners was QB Kyle Murray who completed 11 of 15 passes for 165 yards and 3 TD’s while also adding 74 yards and a TD on the ground. On the season, Oklahoma is averaging 44.3 ppg on 502.3 total yards per game (288.3 passing yds/g; 214 rushing yds/g). Offensively, Oklahoma has been led by QB Kyle Murray who has completed 68.3% of his passes for 11 TD & 2 INT while averaging 257.0 passing yds/g. Murray is also the 2nd leading rusher for the Sooners as he has 3 rushing TD’s on the season and is averaging 60.0 rushing yds/g. The top receivers for the Sooners have been Marquise Brown (4.8 rec/g; 103.0 yds/g; 3 TD) and CeeDee Lamb (4.0 rec/g; 61.8 yds/g; 4 TD). The Sooners backfield is led by Trey Sermon who had 2 TD’s on the season and is averaging 68.8 rushing yds/g on 11.8 att/g. Defensively, Oklahoma is allowing their opponents to average 20.8 ppg on 383.3 total yards per game (211.5 passing yds/g; 171.8 rushing yds/g).

Baylor has to be encouraged with their start this season after last year’s disaster, however, it’s hard to really tell how competitive this Bears team will be as their three wins have come against Abilene Christian, UTSA, & Kansas. Oklahoma survived a major scare from a solid Army team, however, they are still one of the best teams in the country with arguably the top offensive attack in all of College Football led by the talented Kyle Murray. Army provided the blueprint to beat Oklahoma, which is running the football and controlling the clock, however, I just don’t see the Bears being able to execute that type of game plan on the offensive end and as I expect the Sooners to score 50+ in this one, I’m taking Oklahoma to cover this large spread.