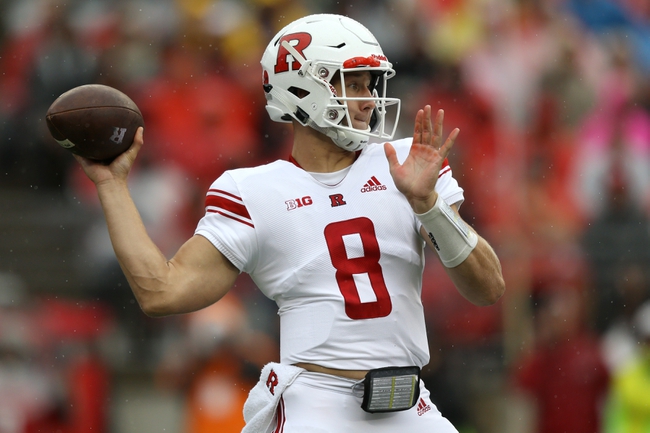 The Indiana Hoosiers look for their second road win of the season to keep pace in the competitive Big Ten East. The Indiana Hoosiers have lost four of their last six road games. Peyton Ramsey is completing 72.1 percent of his passes for 751 yards, seven touchdowns and four interceptions. Ramsey has two or more touchdown passes in four of his last five games. Whop Philyor and Donavan Hale have combined for 341 receiving yards and four touchdowns while Luke Timian has 13 receptions. The Indiana Hoosiers ground game is averaging 183.5 yards per contest, and Stevie Scott leads the way with 406 yards and three touchdowns. Defensively, Indiana is allowing 22.3 points and 329.5 yards per game. Jonathan Crawford leads the Indiana Hoosiers with 24 tackles, Marcelino Ball has two sacks and Isaac James has one interception.

The spreads are getting larger and larger for Rutgers, and for good reason, as the Scarlet Knights don't play a lick of defense and the quarterback play hasn't lived up expectations. The Indiana Hoosiers have been solid out of the gate and had their chances to beat Michigan State last week when forcing four turnovers. The Indiana Hoosiers have failed to cover five of their last eight games as a double-digit favorite. The Rutgers Scarlet Knights have failed to cover seven of their last 11 games when a double-digit underdog. Regardless, it's gotten to the point where I just blindly fade Rutgers. We've seen nothing from this club that suggests a change is coming and each of their last nine losses have been decided by 10 or more points. I'll take Indiana in a blowout.