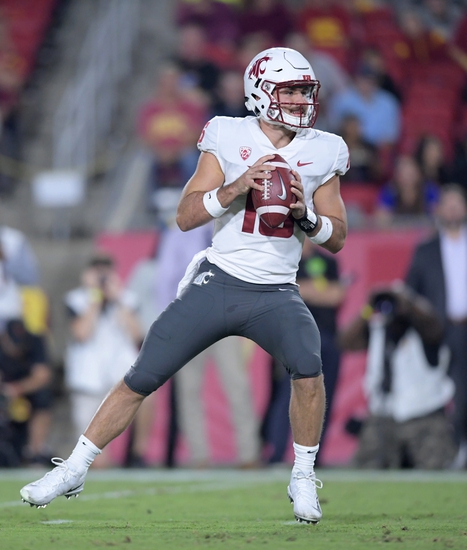 The Utah Utes will travel to Martin Stadium to take on the Washington State Cougars this Saturday night in College Football action.

The Washington State Cougars dropped to 3-1 on the season after being defeated by the USC Trojans, 39-36, this past Friday. In an exciting back and forth game, USC was able to fight back from a double-digit 2nd half deficit to take a 39-36 lead with 8:03 left in regulation and sealed the victory after blocking Washington State’s FG attempt to tie the game with under two minutes left in regulation. Washington State outgained USC by a 435-354 margin and neither team committed a turnover in the game. Leading the way for the Cougars was QB Gardner Minshew who completed 37 of 52 passes for 344 yards and 3 TD. On the season, Washington State is averaging 41.8 ppg on 484.5 total yards per game (401.8 passing yds/g; 82.8 rushing yds/g). Offensively, Washington State has been led by Gardner Minshew who has completed 71.0% of his passes for 11 TD & 3 INT while averaging 386.8 passing yds/g. The top receivers for Minshew and the Cougars have been Davontavean Martin (6.8 rec/g; 72.8 yds/g; 3 TD), Jamire Calvin (5.5 rec/g; 62.8 yds/g), Dezmon Patmon (4.8 rec/g; 58.8 yds/g; TD), and Easop Winston Jr. (4.5 rec/g; 53.0 yds/g; 4 TD). The Cougars backfield has been led by James Williams who has 5 rushing TD’s on the season while averaging 47.8 rushing yds/g. Williams is also a threat in the passing game as he has 2 receiving TD’s on the year and is averaging 40.3 yds/g on 6.3 rec/g. Defensively, Washington State is holding their opponents to an average of 20.5 ppg on 262.0 total yards per game (159.8 passing yds/g; 102.3 rushing yds/g).

Utah is a talented team however, it doesn’t seem as if the Utah offense is going to find much success against the tougher defense teams that they’ll face this season as over their last two games against Northern Illinois and Washington, they’ve combined for just 24 points. Washington State has to be disappointed that they couldn’t pull off a victory on the road the USC, however, this is one again a very dangerous offensive team that can put up points in a hurry and has a defense that generally plays well at home. Utah has been great against the pass this season, however, they haven’t seen a passing attack like the Cougars so far this season and as they are on the road, I think Washington State does enough to cover this small spread.