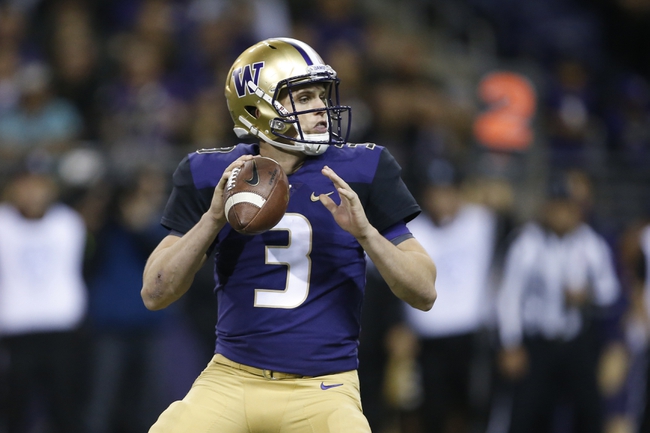 The 20th ranked BYU Cougars will travel to Husky Stadium to take on the 11th ranked Washington Cougars this upcoming Saturday in College Football action.

The 20th ranked BYU Cougars won their 2nd straight game and improved to 3-1 on the season after defeating the McNeese Cowboys, 30-3, this past Saturday. It took a quarter for the BYU offense to figure out the McNeese defense, however, the Cougars had no trouble securing the victory over McNeese after 24 unanswered points in the 2nd quarter gave BYU a 24-3 halftime lead. BYU outgained McNeese by a 291-207 margin and won the turnover battle by a 4-1 margin. Leading the way for the Cougars was RB Lopini Katoa who had 64 rushing yards and 2 TD’s in the victory. On the season, BYU is averaging 25.0 ppg on 320.3 total yards per game (163.8 passing yds/g; 156.5 rushing yds/g). Offensively, BYU has been led by RB Squally Canada who had 5 TD’s on the season and is averaging 80.5 rushing yds/g on 15.3 att/g. QB Tanner Mangum has completed 57.8% of his passes for 3 TD & 2 INT while averaging 153.0 passing yds/g. The top receiving targets for Mangum and the Cougars have been Aleva Hifo (3.0 rec/g; 32.3 yds/g) and Moroni Laulu-Pututau (3.5 rec/g; 30.0 yds/g; TD). Defensively, BYU is holding their opponents to an average of 17.0 ppg on 328.3 total yards per game (183.8 passing yds/g; 144.5 rushing yds/g).

The 11th ranked Washington Huskies won their 3rd straight game and improved to 3-1 on the season after defeating the Arizona State Wildcats, 27-20, this past Saturday. Washington had all they could handle from the Sun Devils however, were able to create some separation and hold on for the victory after taking a 27-13 lead with 10:59 left in regulation. Washington outgained Arizona State by a 373-268 margin and held the Sun Devils to just 16 first downs in the victory. Leading the way for the Huskies was QB Jake Browning who completed 15 of 22 passes for 202 yards and 3 TD’s. On the season, Washington is averaging 27.3 ppg on 432.5 total yards per game (272.5 passing yds/g; 160.0 rushing yds/g). Offensively, Washington has been led by QB Jake Browning who has completed 60.9% of his passes for 7 TD & 4 INT while averaging 241.5 passing yds/g. The top receiving targets for Browning and the Huskies have been Aaron Fuller (5.5 rec/g; 91.8 yds/g; TD), Ty Jones (2.5 rec/g; 50.5 yds/g; 4 TD, and Quinten Pounds (1.0 rec/g; 27.8 yds/g; TD). Leading the way for the Huskies backfield has been Myles Gaskin who had 2 rushing TD’s on the season and is averaging 89.3 rushing yds/g on 20.8 att/g. Defensively, Washington is holding their opponents to an average of 12.8 ppg on 302.8 total yards per game (154.0 passing yds/g; 148.8 rushing yds/g).

BYU has surprised a lot of people this season, especially after going on the road to knock off Wisconsin, however, this is going to be their bigger challenge as the Washington defense is one of the best in the country. Washington picked a solid win over Arizona State, but after seeing Auburn lose recently to LSU, the Huskies know going forward that they need to be pretty much perfect if they are going to make the College Football playoffs by the end of the season. I just don’t see the BYU offense being able to generate many points on the road against the Huskies defense and although this is large spread to cover against a good BYU defense, I think Browning and Gaskin will be able to do enough to cover this spread. Take Washington to cover.