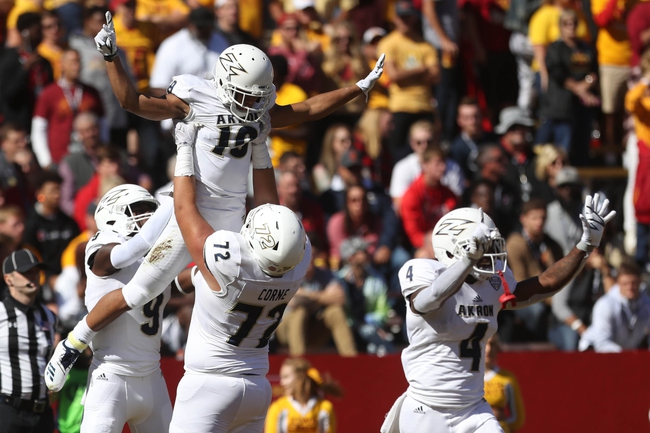 The Miami (OH) Redhawks couldn’t contain the Western Michigan passing attack in a 40-39 shootout defeat in week five to fall to 1-3. Miami (OH) lost the yardage battle 562-349 with eight penalties mixed although the offense did not turn the ball over.

Redhawks quarterback Gus Ragland enjoyed a strong passing game as he completed 22-32 for 294 yards and three touchdowns. Ragland received zero help on the ground with Maurice Thomas leading the team with 28 yards on five carries.

Jack Sorenson was the Redhawks top pass catcher with nine receptions for 156 yards while Dominique Robinson caught four balls for 59 yards and a pair of touchdowns.

The Akron Zips entered their bye week with a 26-13 loss at Iowa State as a 19 point road dog. Akron never got in the flow offensively with the team being outgained 365-244 with no ability to move the ball effectively on the ground.

Zips quarterback Kato Nelson completed 12-28 for 153 yards and a touchdown along with an interception. Nelson topped Akron on the ground as well with 56 yards on 15 carries.

Nate Stewart topped the Zips receivers with four receptions for 52 yards while Andre Williams caught two passes for 45 yards including a 26 yard scoring strike that gave the team a 7-0 lead in the first quarter.