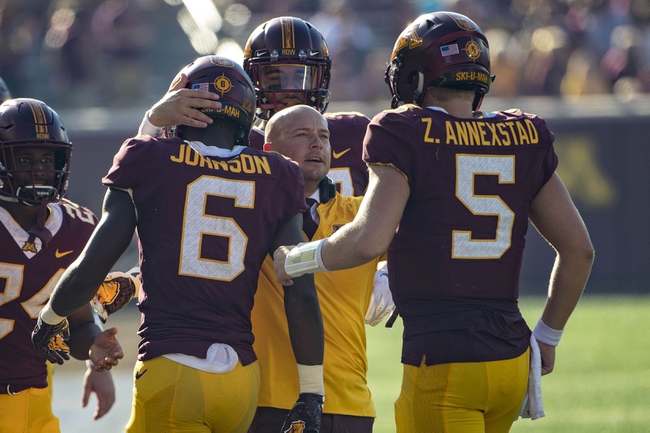 The Iowa Hawkeyes hope to build on their solid 3-1 start to the season when they take to the road for the first time. The Iowa Hawkeyes have lost three of their last four road games. Nate Stanley is completing 62.7 percent of his passes for 839 yards, five touchdowns and three interceptions. Stanley has one or less touchdown passes in five of his last eight games. T.J. Hockenson and Noah Fant have combined for 407 receiving yards and four touchdowns while Nick Easley has 12 receptions. The Iowa Hawkeyes ground game is averaging 167.2 yards per contest, and Toren Young leads the way with 268 yards and two touchdowns. Defensively, Iowa is allowing 13 points and 260.5 yards per game. Jack Hockaday leads the Iowa Hawkeyes with 28 tackles, A.J. Epenesa has four sacks and Amani Hooker has one interception.

Each of the last three games between Minnesota and Iowa have been decided by seven or less points. The home team has also been on the winning side of this rivarly seven of the last nine meetings. The Iowa Hawkeyes are obviously the better team and had their chances to beat a really good Wisconsin team a couple of weeks ago, but the Minnesota Golden Gophers are allowing just 256.3 yards in three home games and will be able to match Iowa's physicality in the trenches. Minnesota makes a lot of plays in the backfield and is a top-50 team in the country when it comes to stopping the run. The Minnesota Golden Gophers have covered six of their last seven home games when an underdog of at least three points. This is likely going to be a Big Ten defensive blood bath and points will be tough to come by. Expect another close game. So, give me my free points with the home team.