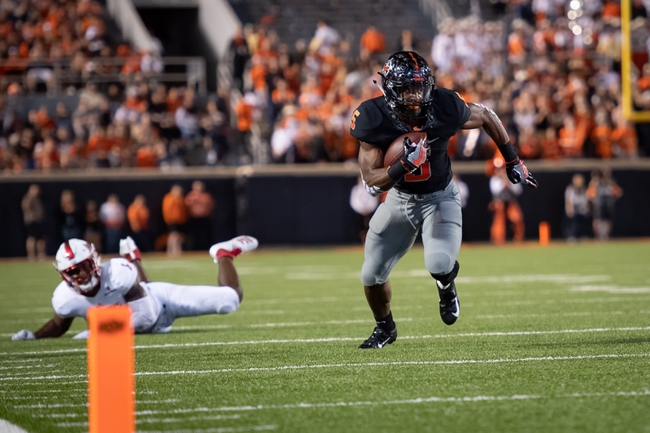 The Iowa State Cyclones never found the groove on the offensive side of the football in a 17-14 loss at TCU as an eleven point underdog to fall to 1-4.Iowa State was outgained 299-199 but won the turnover battle 3-1 with a lost fumble returned for a TD by the Cowboys.

Cyclones quarterback Zeb Noland completed 14-28 for 78 yards and a touchdown with no interceptions while carrying the ball three times for 16 yards.

David Montgomery gave Iowa State some punch on the ground with 101 yards on 21 touches including a one yard touchdown. The Cyclones were unable to stretch the field through the air with leading receiver Deshaunte Jones logging three catches for 23 yards.

The Oklahoma State Cowboys took a 24-7 halftime lead against Kansas before posting a 48-28 victory as a 17 point road favorite. Oklahoma State cranked up their offense with 568 yards while limiting the Jayhawks to 368 yards.

Cowboys quarterback Taylor Cornelius enjoyed a near perfect passing performance as he completed 15-20 for 312 yards and four touchdowns and an interception while running for 18 yards on five totes.

Justice Hill topped OSU on the ground with 189 yards on 31 carries and a TD while Chuba Hubbard added 57 yards on five tries with a score. The Cowboys three headed receiving corps featured Landon Wolf and Tylan Wallace combine for 220 yards on ten catches and a TD each while Tyron Johnson snagged three passes for 86 yards and a pair of TD’s.