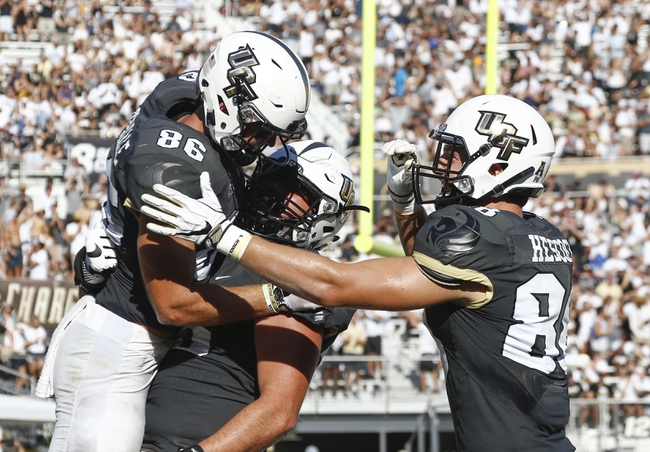 The SMU Mustangs look for their first road victory of the season to get back to a .500 record. The SMU Mustangs have lost nine of their last 12 road games. William Brown is completing 66.7 percent of his passes for 541 yards, six touchdowns and one interception. Ben Hicks and William Brown have combined for 11 touchdown passes and three interceptions this season. James Proche and Reggie Roberson Jr. have combined for 643 receiving yards and six touchdowns while Braeden West has 17 receptions. The SMU Mustangs ground game is averaging 129.4 yards per contest, and West leads the way with 343 yards and four touchdowns. Defensively, SMU is allowing 38 points and 405 yards per game. Rodney Clemons leads the SMU Mustangs with 40 tackles, Richard Moore has two sacks and Shaine Hailey has one interception.

The UCF Knights look to keep the ball rolling, as this team hasn’t lost a game since December of 2016. The UCF Knights have won each of their last 10 home games. McKenzie Milton is completing 61.3 percent of his passes for 1,223 yards, 13 touchdowns and three interceptions. Milton has three or more touchdown passes in six of his last eight games. Gabriel Davis and Tre Nixon have combined for 537 receiving yards and six touchdowns while Dredrick Snelson has 15 receptions. The UCF Knights ground game is averaging 272.7 yards per contest, and Adrian Killins Jr. leads the way with 233 yards and three touchdowns. Defensively, UCF is allowing 16.8 points and 365.5 yards per game. Richie Grant leads the UCF Knights with 34 tackles, Brendon Hayes has two sacks and Eric Mitchell has one interception.

SMU is finally starting to play winning football and score points with its new quarterback, but I'm not sure how much stock we're supposed to put into wins over Navy and Houston Baptist. The UCF Knights haven't missed a beat despite many new faces on the roster and the coaching staff, and they're outscoring teams by 32 points this season. UCF has also been a consistent covering team the last year plus and is 10-6 ATS in its last 16 games when favored by at least 14 points. The UCF Knights are just one of those teams that I'm going to continue backing regardless of the number until it stops paying off. UCF is easily the best team in this conference and I'm not sold on SMU until it shows up against a quality team. I never love laying big numbers, but I'll side with the Knights in a home blowout anyway.