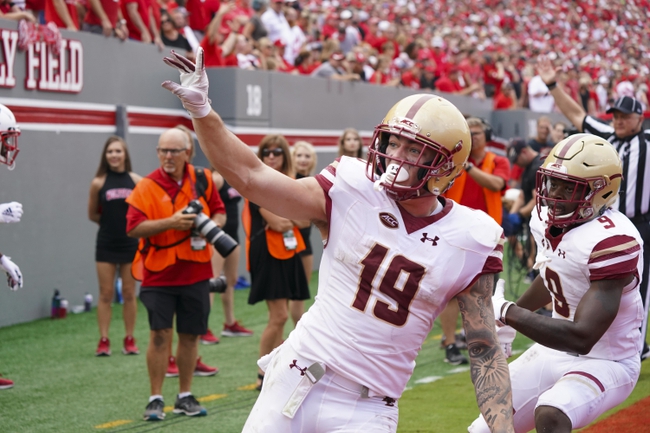 The Louisville Cardinals will match up with the Boston College Eagles at BC Alumni Stadium on Saturday in ACC college football play.

Louisville comes into this one at 2-4 so far this year. The Cardinals were blown out by Alabama in their opener, then took care of Indiana State and Western Kentucky before falling in succession to Virginia, Florida State and Georgia Tech.

In the Jackets game, Louisville QB Jawon Pass put up 299 yards with a pair of scores, and Jordan Travis led the rush on five carries for 48 yards (he also had a pass TD and INT). Leading the Cardinals receivers was Chatarius Atwell with 79 yards and two scores off four grabs.

As for Boston College, they’re sitting at 4-2 on the season. The Eagles took out UMass, Holy Cross and Wake Forest to open things up, then beat Temple in between a sandwich of losses to Purdue and NC State.

In the NC State game, Boston College QB Anthony Brown put up 198 yards with one TD, and Ben Glines logged 90 yards with a TD on the ground. The Eagles’ lead receiver was Michael Walker on three catches for 72 yards.

Louisville was run over by Virginia, but came back pretty competitive against Florida State (28-24). That momentum died out in the Yellow Jackets game, as GT hung six rushing touchdowns on the Cards, averaging a whopping 8.3 yards per play.

Over on the Eagles’ side, they hung in there against NC State, and ended up losing by just five points 28-23. After Louisville’s defensive showing last week, I’m not too worried about BC being able to put up points here. I’m going to go with the Eagles here for the cover.