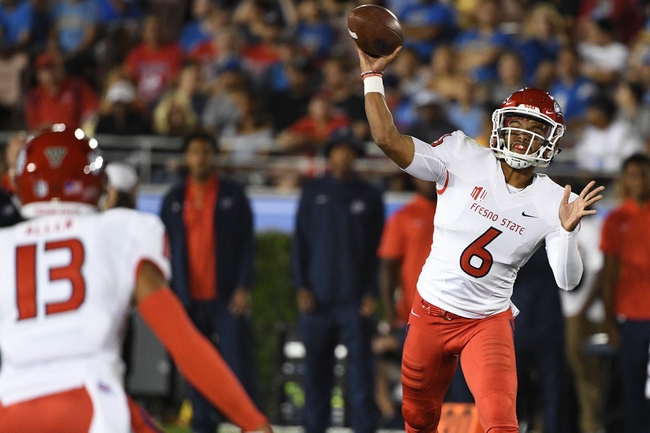 The Wyoming Cowboys will meet the Fresno State Bulldogs in college football action from Bulldog Stadium on Saturday.

Wyoming enters this one at 2-4 on the season. The Cowboys took out NM State in the opener, then lost to Washington State and Missouri before beating Wofford. Wyoming lost their last two games versus Boise State and Hawaii.

In the Hawaii game, Wyoming QB Tyler Vander Waal put up 87 yards passing, and Nico Evans did the rest on 192 rush yards from 24 carries. James Price led the Cowboys receiver on 38 yards from three catches.

Over on the Fresno State side, they’re currently 4-1 this year. The Bulldogs fell to Minnesota in Week 2, but otherwise have taken out Idaho, UCLA, Toledo and Nevada.

In the Nevada matchup, Fresno State QB Marcus McMaryion logged 241 yards with two TDs, and Ronnie Rivers had 12 yards and a score on the ground. Jared Rice led the Bulldogs receivers with his three catches for 98 yards.

Ever since putting up 29 against NM State in the opener, Wyoming has been in something of an offensive funk, failing to score more than 19 points in each of their last five games. The Cowboys have allowed 34 points or more in three of those five as well.

As for the Bulldogs, they’ve scored at least 21 points in four of their five games (all the wins, in fact) and have held their opponents to 27 points or fewer in every game. That’s a pretty big disparity when you look at both sides, so I’m going to have to go with the Bulldogs here.

The pick in this article is the opinion of the writer, not a Sports Chat Place site consensus.
Previous Pick
BYU vs. Hawaii - 10/13/18 College Football Pick, Odds, and Prediction
Next Pick
College Football Picks and Odds Podcast Week 7 2018: Sports Pick Info Friday Final