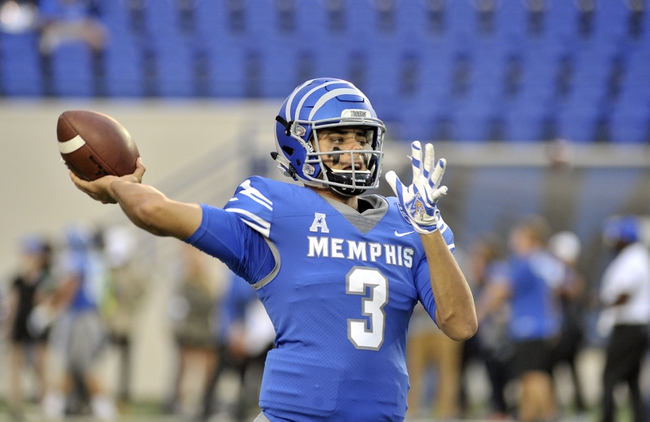 The UCF Knights look to keep the ball rolling, as this program looks for what would be their 19th straight victory. The UCF Knights haven’t lost a road game since November of 2016. McKenzie Milton is completing 59.6 percent of his passes for 1,501 yards, 15 touchdowns and four interceptions. Milton has two or more touchdown passes in 10 of his last 12 games. Gabriel Davis and Tre Nixon have combined for 677 receiving yards and seven touchdowns while Dredrick Snelson has 21 receptions. The UCF Knights ground game is averaging 269.4 yards per contest, and Adrian Killins Jr. leads the way with 346 yards and four touchdowns. Defensively, UCF is allowing 17.4 points and 356.4 yards per game. Richie Grant leads the UCF Knights with 42 tackles, Brendon Hayes has two sacks and Eric Mitchell has one interception.

The Memphis Tigers look to remain unbeaten at home while getting their third win over a ranked team since the start of last season. The Memphis Tigers have won 12 of their last 13 home games. Brady White is completing 69.2 percent of his passes for 1,549 yards, 15 touchdowns and one interception. White has two or more touchdown passes in four of his last six games. Damonte Coxie and Pop Williams have combined for 675 receiving yards and five touchdowns while Darrell Henderson has nine receptions. The Memphis Tigers ground game is averaging 274.5 yards per contest, and Henderson leads the way with 934 yards and 12 touchdowns. Defensively, Memphis is allowing 24.5 points and 348.7 yards per game. Curtis Akins leads the Memphis Tigers with 44 tackles, Bryce Huff has five sacks and T.J. Carter has one interception.

We know the resume of the UCF Knights, as they haven't lost a game since late 2016 and have been covering majority of those victories as well. The UCF Knights are also 14-4-1 ATS in their last 19 games when favored by at least five points. The Memphis Tigers have been just as good at home over the years, winning 12 of their last 13 tries and covering six of their last nine. The last two meetings between UCF and Memphis have been decided by just seven points, which includes last years contest. Memphis has the offensive firepower to give UCF a run and its improved defense gives it a fighting chance to end the Knights' streak. Points with Memphis at home is tempting, but you rarely get UCF with lines this soft, and based on their results the last two years, it's hard to argue against them. I'll be the square here and back UCF and the chalk, but I feel dirty doing so.