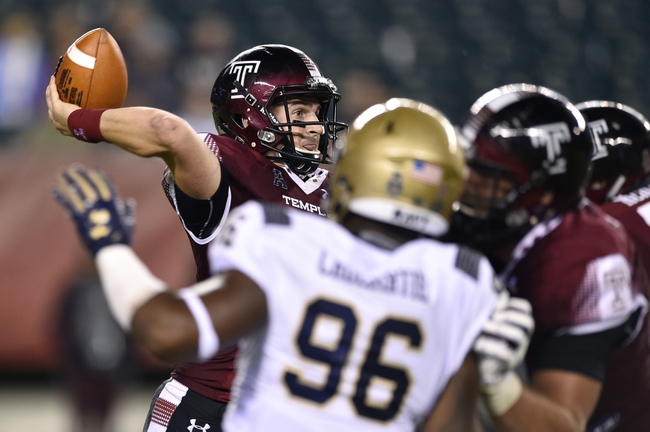 The Temple Owls look for their second road victory of the season to get a game above a .500 record. The Temple Owls have won four of their last six road games. Anthony Russo is completing 54.6 percent of his passes for 873 yards, five touchdowns and six interceptions. Frank Nutile and Russo have combined for 10 touchdown passes and 10 interceptions this season. Branden Mack and Isaiah Wright have combined for 458 receiving yards and five touchdowns while Ventell Bryant has 18 receptions. The Temple Owls ground game is averaging 146.8 yards per contest, and Ryquell Armstead leads the way with 626 yards and six touchdowns. Defensively, Temple is allowing 22.8 points and 341.5 yards per game. Shaun Bradley leads the Temple Owls with 42 tackles, Michael Dogbe has 4.5 sacks and Rock Ya-Sin has two interceptions.

The Temple Owls have bounced back nicely after starting the season with two losses, and their defense has allowed 17 or less points in three of their last four games. It's a clear down year for the Navy Midshipmen, but they have played their best ball at home this season where they're outscoring teams by 15.5 points in two games. The Temple Owls have covered six of their last nine games when favored by at least three points. The Navy Midshipmen are 6-2-1 ATS in their last nine games when an underdog of at least three points. It's always tough to play Navy when there's no extra time to prepare, and four of the last five meetings between Navy and Temple have been decided by eight or less points. Navy is still a well coached team and usually gets the job done at home. I like the value of the points here.