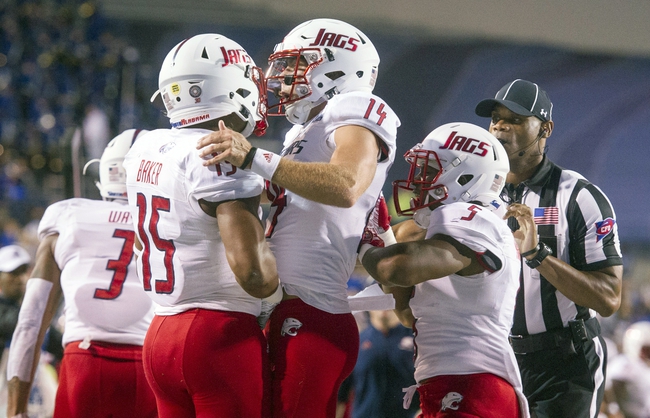 The Alabama State Jaguars head to the South Alabama Jaguars in an FCS-FBS college football matchup.

The Alabama State Hornets will be looking to climb back to .500 following a tough 28-25 overtime win at Alcorn State. The defense played well but the offense needed more balance and punch for Alabama State.

Jaguars quarterback KaDarius Davis connected on 20-36 for 155 yards and a pair of touchdowns along with an interception while losing 18 yards on 12 carries. Ezra Gray led the Alabama State rushing attack with 78 yards on 20 carries and a touchdown but he averaged just under four yards per touch. Wallace Corker paced the Jaguars receiving corps with three catches for 51 yards while Joe Williams IV made two receptions for 29 yards and a TD.

The South Alabama State Jaguars have had their share of problems on both sides of the football and that trend followed them in a 48-13 defeat at Georgia Southern heading in to their bye week. South Alabama was outgained 394-326 and committed four turnovers which was too much to overcome.

USA quarterback Evan Orth connected on 19-30 for 197 yards and an interception with the only pass that Cephus Johnson threw was also picked off and returned for a touchdown.

Tra Minter topped South Alabama on the ground with 38 yards on 16 carries including a trip to the end zone while Kawaan Baker made three receptions for 79 yards.