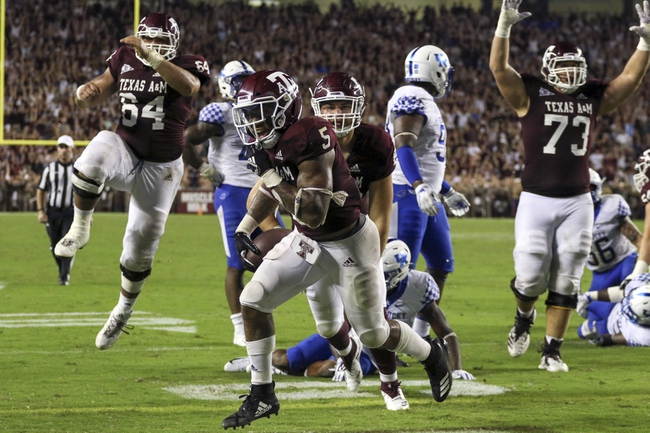 The Texas A&M Aggies will look to build on back-to-back wins, including a 20-14 overtime win over Kentucky in their last outing to climb to 4-2 this season. Kellen Mond has thrown for 1,447 yards, 9 touchdowns and 5 interceptions while rushing for another 4 TDs as well. Trayveon Williams has rushed for an Aggie-leading 720 yards and 7 TDs while Jace Sternberger leads A&M with 22 catches for 351 yards and 5 touchdowns. As a team, Texas A&M is averaging 491.5 yards of total offense and 33.3 points per game this season. The Aggies’ defense is also strong against the run, allowing the 4th-fewest rushing yards per game in FBS with 78.8 per game this season.

The South Carolina Gamecocks will look to find some measure of consistency after alternating wins and losses through their first 5 games this season, including a 37-35 win over Missouri in their last outing. Jake Bentley leads the Gamecocks with 928 yards, 7 touchdowns and 6 interceptions at QB while Michael Scarnecchia threw for 3 touchdowns in the Missouri game which was his first career start. Rico Dowdle leads the Gamecocks with 337 rushing yards and 2 TDs while Bryan Edwards had 24 catches for a team-high 309 yards and 5 TDs and Deebo Samuel has a team-high 26 grabs for 294 yards and 3 scores. As a team, South Carolina is averaging 426.8 yards of total offense and 30 points per game this season.

Scarnecchia looked good in his debut, but the fact is that I’m not sure how much I can trust the Gamecocks with so many question marks at QB. Texas A&M has the talent on both sides of the ball right now, and did a good job in stifling Kentucky’s ground game in their win over the Wildcats. All in all, I think with the low line, Texas A&M is the way to go here.