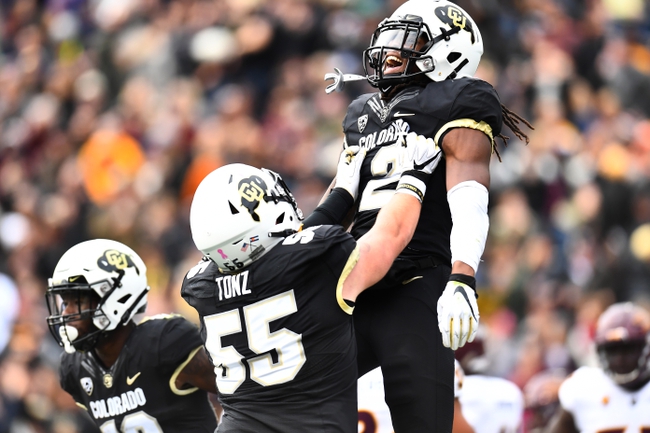 The 19th ranked Colorado Buffaloes will travel to Los Angeles Memorial Coliseum to take on the USC Trojans this Saturday night in College Football action.

The Colorado Buffaloes stayed perfect on the season, improving to 5-0 (2-0 Pac 12) on the season, after defeating the Arizona State Wildcats, 28-21, this past Saturday. Colorado was able to score 14 unanswered points in the 3rd quarter to take the lead and was masterful in the 4th quarter as they put together a 13-play drive that took over 7 minutes to run out the clock. Colorado outgained Arizona State by a 494-367 margin and committed no turnovers in the victory. Leading the way for the Buffaloes was Laviska Shenault Jr. who had 127 yards & 2 TD on 13 receptions while also adding 2 rushing TD’s. On the season, Colorado is averaging 37.8 ppg on 490.6 total yards per game (293.0 passing yds/g; 197.6 rushing yds/g).  Offensively, Colorado has been led by one of the best WR’s in College Football in Laviska Shenault Jr. who has 6 receiving TD’s on the season while averaging 141.6 yds/g on 10.2 rec/g. Shenault Jr. has also been a treat on the ground near the goal line as he also the only averages 2.6 att/g, he does have 4 rushing TD’s. QB Steven Montez has completed 75.2% of his passes for 11 TD & 2 INT while averaging 284.0 passing yds/g. Montez is not a huge running QB, however, he can scramble when needed and has 3 rushing TD’s on the season. Leading the way for the Buffaloes backfield has been Travon McMillian who had 4 TD’s on the season while averaging 105.6 rushing yds/g on 16.8 att/g. Defensively, Colorado is holding their opponents to an average of 18.4 ppg on 355.0 total yards per game (201.0 passing yds/g; 154.0 rushing yds/g).

Colorado hasn’t played the strongest of competition however their winning games and certain have some great offensive weapons at the impact positions in Laviska Shenault Jr. & Steven Montez. USC had their struggles early in the season against both Stanford and Texas, however, picked up a nice home win agianst Washington State recently has some of the best young talent in the country. I feel that these two teams are pretty evenly matched and although I think USC will be able to pull out a victory at home against the Buffaloes, I think this game is going to come down to the wire and the Buffaloes will cover with the points.

The pick in this article is the opinion of the writer, not a Sports Chat Place site consensus.
Previous Pick
BYU vs. Hawaii - 10/13/18 College Football Pick, Odds, and Prediction
Next Pick
College Football Picks and Odds Podcast Week 7 2018: Sports Pick Info Friday Final