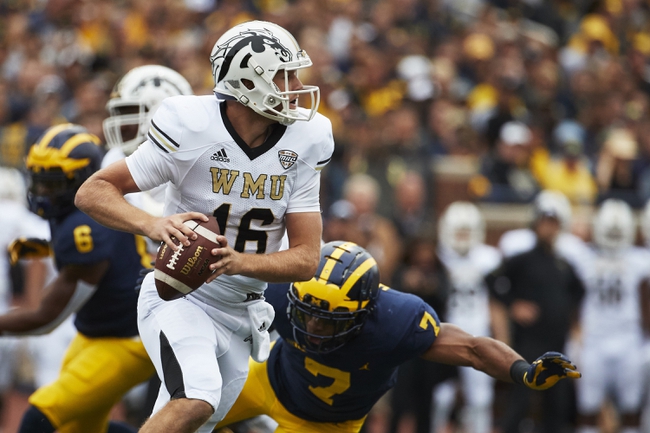 The Western Michigan Broncos will look for another win to add to their current 5-game winning streak following a 42-35 win over Bowling Green in their last outing. Jon Wassink has thrown for 1,944 yards, 16 touchdowns and 6 interceptions on 61.9% passing, while LeVante Bellamy has rushed for 676 yards and 4 touchdowns and Jamauri Bogan has racked up 362 yards and 8 rushing TDs this season. Jayden Reed leads the Broncos with 36 catches for 533 receiving yards and 6 TDs, while D’Wayne Eskridge has put up 21 receptions for 504 yards and 3 scores on the year. As a team, Western Michigan is averaging 485.9 yards of total offense and 36.6 points per game this season.

The Central Michigan Chippewas will be looking for their first conference victory of the season to snap a 3-game losing streak following a 24-23 loss to Ball State in their last outing. Tommy Lazzaro has thrown for 607 yards, 5 touchdowns and 8 interceptions on 50.4% passing while also rushing for a team-high 343 yards and 3 touchdowns. Cameron Cole leads the Chippewas’ receiving corps with 160 receiving yards while Julian Hicks has a team-high 17 catches for 154 yards and 3 TDs. As a team, Central Michigan is averaging 286.7 yards of total offense and 18.1 points per game this season.

I’m usually tempted to take a home dog in rivalry games like these, and the points hold some value as Western Michigan has won by 3 points or less in 2 of their last 3 games. However, the Broncos are just a level above Central Michigan this season, and it’s not like home field has mattered between these two teams as the road team has covered each of the last six head-to-head meetings between the two sides. All in all, I think this is a game that Western Michigan should win by at least a touchdown, so I’ll lay the points with the Broncos in this spot.