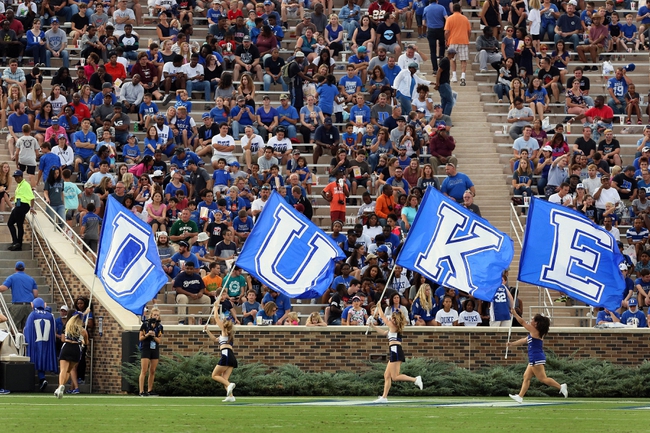 The Virginia Cavaliers and the Duke Blue Devils will meet up at Wallace Wade Stadium on Saturday for a college football ACC showdown.

Virginia comes into this game at 4-2 overall on the season. The Cavaliers’ losses came against Indiana and NC State, but otherwise they’ve taken out Richmond, Ohio Louisville and Miami (FL).

In that Hurricanes game, Virginia QB Bryce Perkins logged 92 yards with three picks, and Jordan Ellis put up 86 yards and a TD on the ground. Tops in receiving for the Cavs was Hasise Dubois with four grabs for 32 yards. (Joe Reed had two catches for 32 as well.)

Over on the Duke side, they’re sitting at 5-1 this year. The Blue Devils lost to Virginia Tech back on September 29 but otherwise they’ve bagged wins over Army, Northwestern, Baylor, NC Central and Georgia Tech.

In the GT game, Duke QB Daniel Jones put up 206 yards with three scores and a pick, and Deon Jackson was the high man on the ground with 98 yards and a TD. TJ Rahming was the top receiver for the Blue Devils on 91 yards and a score from four grabs.

The Cavaliers are 5-1 ATS in their last six overall and 4-1 ATS versus a team with a winning record. Virginia is 5-2 in the last seven on grass and the over is 12-3-1 in their last 16 in October.

The Hurricanes game was a really weird one for Virginia, but it still goes in the books as a W. Beyond that, Virginia has been scoring reasonably well, with at least 21 points in four of their other five games.

As for Duke, they’ve been scoring well also. The Blue Devils have put up at least 21 in five of their six games—the lone exception being the Virginia Tech loss.

I like Duke to keep the pressure on here and come out firing with a big day so I’m going with the Blue Devils to cover.