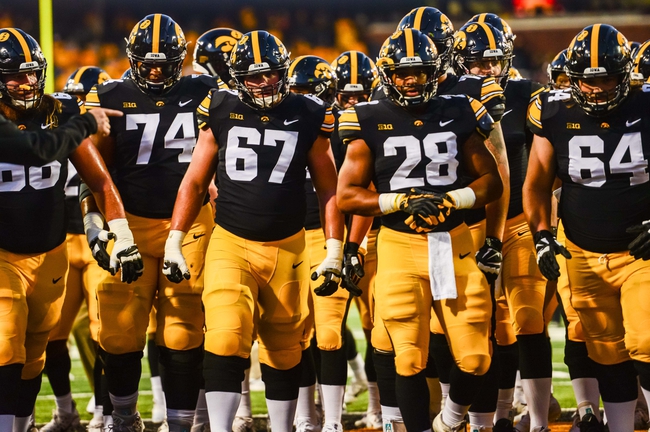 The Maryland Terrapins look for their second road win of the season to win at least five games for the fourth time in the last eight years. The Maryland Terrapins have won two of their three non-home games this season. Kasim Hill is completing 53.4 percent of his passes for 654 yards, six touchdowns and two interceptions. Hill has one or less touchdown passes in seven of his nine career games. Taivon Jacobs and DJ Turner have combined for 319 receiving yards and three touchdowns while Jeshaun Jones has seven receptions. The Maryland Terrapins ground game is averaging 245.1 yards per contest, and Ty Johnson leads the way with 435 yards and three touchdowns. Defensively, Maryland is allowing 23.3 points and 316.5 yards per game. Tre Watson leads the Maryland Terrapins with 54 tackles, Byron Cowart has three sacks and Darnell Savage Jr. has four interceptions.

The Iowa Hawkeyes look for their third straight victory to remain in the Big Ten West race. The Iowa Hawkeyes have won three of their four home games this season. Nate Stanley is completing 62.1 percent of his passes for 1,473 yards, 15 touchdowns and five interceptions. Stanley has 12 touchdown passes and three interceptions in his last three games. T.J. Hockenson and Noah Fant have combined for 691 receiving yards and nine touchdowns while Nick Easley has 22 receptions. The Iowa Hawkeyes ground game is averaging 155.6 yards per contest, and Toren Young leads the way with 382 yards and two touchdowns. Defensively, Iowa is allowing 16.5 points and 282 yards per game. Kristian Welch leads the Iowa Hawkeyes with 35 tackles, Anthony Nelson has five sacks and Riley Moss has two interceptions.

The Maryland Terrapins have done well this season in non-home games and have more than held their own when playing teams probably more talented than them. The Iowa Hawkeyes just won back-to-back road games by a margin of 21.5 points and all five of their victories have come by at least 10 points. The Maryland Terrapins have failed to cover nine of their last 13 games when a double-digit underdog. The Iowa Hawkeyes have covered four of their last five games when a double-digit favorite. While Maryland has been good in the road role this season, Iowa has been one of the more consistent teams dating back to last year and usually covers numbers that aren't too crazy. This is one of those games the Iowa Hawkeyes should be able to handle at home.