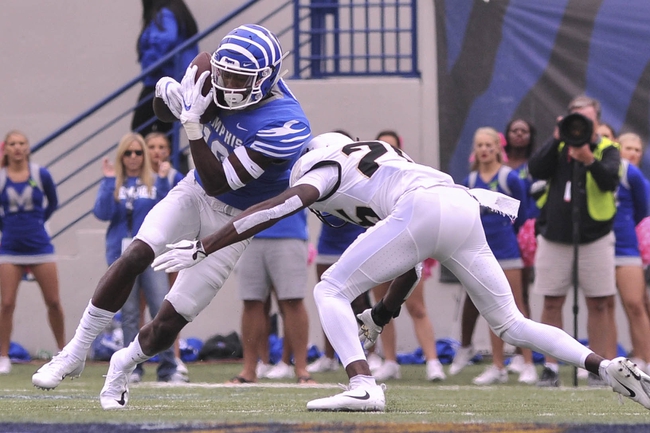 The Memphis Tigers and the Missouri Tigers meet in a week 8 non-conference college football matchup from Memorial Stadium on Saturday afternoon.

The Memphis Tigers will look to bounce back after letting one slip away last time out, falling to UCF by a final score of 31-30. Brady White has thrown for 1,758 yards, 15 touchdowns and an interception on 67.6% passing while Darrell Henderson has rushed for 1,133 yards and 13 touchdowns this season. Patrick Taylor Jr. has been a nice second option in the backfield, rushing for 384 yards and 6 TDs. Damonte Coxie leads Memphis with 34 catches for 552 yards and 4 touchdowns this season. As a team, Memphis is sitting top-10 in the country in total yardage, rushing yardage and points per game with 539 yards of total offense, 275.4 rushing yards and 43.9 points per game this season.

The Missouri Tigers will be out to snap a 3-game losing streak after falling to Alabama in their last outing by a final score of 39-10 in their last outing. Drew Lock has thrown for 1,629 yards, 12 touchdowns and 6 interceptions on 58.7% passing this season while Larry Rountree III and Damarea Crockett have combined to rush for 792 yards and 7 rushing TDs this season. Emanuel Hall has 18 catches for 430 yards and 3 touchdowns while Johnathon Johnson has 3 receiving TDs and Albert Okwuegbunam has a team-high 31 catches this season. As a team, Missouri is averaging 477 yards of total offense and 34.2 points per game this season.

Both of these teams are due for a breakout offensively, with Memphis letting one get away against UCF and Missouri being shutout for the last three quarters against Alabama after showing signs of life in the first quarter. With that said, Missouri is a solid team at home, and are one of the more dynamic offenses in the SEC. However, Memphis is one of the top offenses in the country, and can go punch-for-punch with Missouri in this contest. Memphis hasn’t had a ton of luck against the SEC in the past, but they’ve proved to have evolved into one of the most threatening offensive units in the country, so I’ll take a shot with Memphis and the points here.