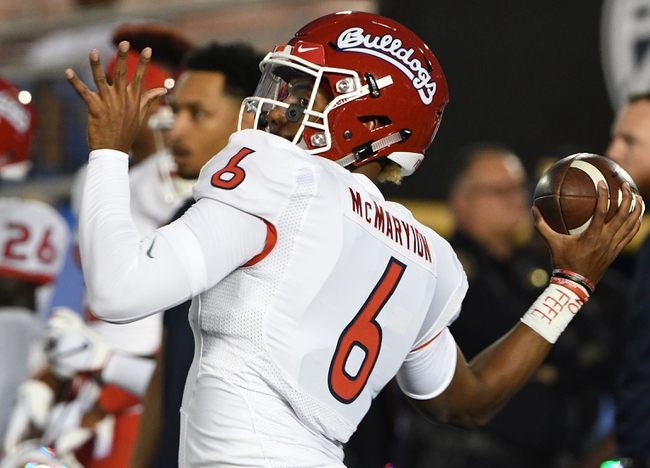 The Fresno State Bulldogs will travel to Dreamstyle Stadium to take on the New Mexico Lobos this Saturday night in College Football action.

The Fresno State Bulldogs won their 4th straight game and improved to 5-1 (2-0 MW) on the season after defeating the Wyoming Cowboys, 27-3, this past Saturday. Fresno State was outstanding on the defensive end for the 2nd straight week and had no trouble securing the victory after taking a 20-3 lead early in the 3rd quarter. Fresno State outgained Wyoming by a 391-221 margin and won the turnover battle by a 1-0 margin. Leading the way for the Bulldogs was QB Marcus McMaryion who completed 22 of 32 passes for 287 yards & 2 TD, while also adding 53 rushing yards & 2 TD’s on 7 carries. On the season, Fresno State is averaging 38.0 ppg on 403.5 total yards per game (270.8 passing yds/g; 132.7 rushing yds/g). Offensively, Fresno State has been led by Marcus McMaryion who has completed 71.4% of his passes for 11 TD & 2 INT while averaging 263.0 passing yds/g. McMaryion also is a major threat with his legs as he has accounted for 7 rushing TD’s on the season. The top receivers for McMaryion and the Bulldogs have been KeeSean Johnson (6.3 rec/g; 85.0 yds/g; 4 TD), and Jared Rice (4.3 rec/g; 58.2 yds/g; 2 TD). Leading the way for the Bulldogs backfield has been Jordan Mims who has 4 rushing TD’s on the season while averaging 40.7 yds/g on 11.8 att/g. Mims is also a threat in the passing game as he has a receiving TD and is averaging 39.3 yds/g on 2.7 rec/g. Defensively, Fresno State is holding their opponents to an average of 13.5 ppg on 301.2 total yards per game (180.2 passing yds/g; 121.0 rushing yds/g).

Fresno State is showing us that last year’s remarkable turnaround was no fluke as the Bulldogs are looking as if they might be the team to beat behind QB Marcus McMaryion and a defense that currently ranks 2nd in CFB in scoring defense. New Mexico has an offense that can put up some points, however, the defense has been a major concern as evident when they lost at home to Liberty Flames by a 52-43 margin in week 4. Fresno State has allowed just 6 points over their last two games and as I just don’t see the Lobos being able to due much on either end of the ball against Fresno State, I’m taking the Bulldogs to cover this large road spread.