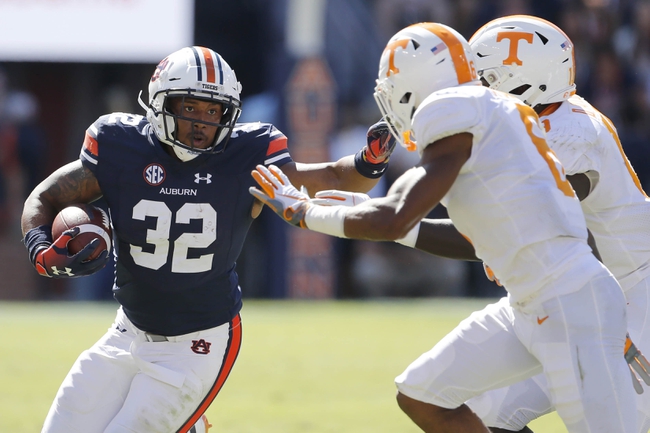 The Auburn Tigers are in dire need of a win after back-to-back losses, following a 30-24 loss to Tennessee in their last outing. Jarrett Stidham has thrown for for 1,499 yards, 7 touchdowns and 4 interceptions on 60.6% passing this season, while JaTarvious Whitlow has rushed for 456 yards and 4 touchdowns this season. Ryan Davis has an Auburn-high 36 receptions for 309 yards while Anthony Schwartz and Seth Williams each have 2 TDs this season. As a team, Auburn is averaging 376.1 yards of total offense and 28 points per game this season.

The Ole Miss Rebels will look to build on back-to-back wins, including a 37-33 come from behind win over Arkansas in their last outing. Jordan Ta’amu has thrown for 2,298 yards, 15 touchdowns and 5 picks on 65.8% passing while also rushing for 4 touchdowns as well. Scottie Phillips leads the Rebels with 723 rushing yards and 9 TDs, while A.J. Brown has 650 receiving yards, 4 touchdowns and a team-high 50 catches. D.K. Metcalf has 5 receiving touchdowns and 569 yards, while DaMarkus Lodge has 466 receiving yards and 35 catches. As a team, Ole Miss is averaging the 5th-most total yardage and 4th-most passing yardage per game with 550.9 yards and 353.1 passing yards per game along with 41.6 points per game this season.

Outside of their 63 points against Alabama State and 34 points against an Arkansas team that is 1-6 SU and the worst in the SEC, Auburn hasn’t put up more than 24 points in any of their other five games this season. The defense has been good, but offensive numbers like those won’t cut it against an Ole Miss team that can light up the scoreboard on any given day. The talent is there for Auburn, it just seems like the Tigers are struggling to put it all together. Ole Miss didn’t look great against Arkansas but they did rally to get the win and should have some momentum after that. I’ll side with Ole Miss at home in this one.