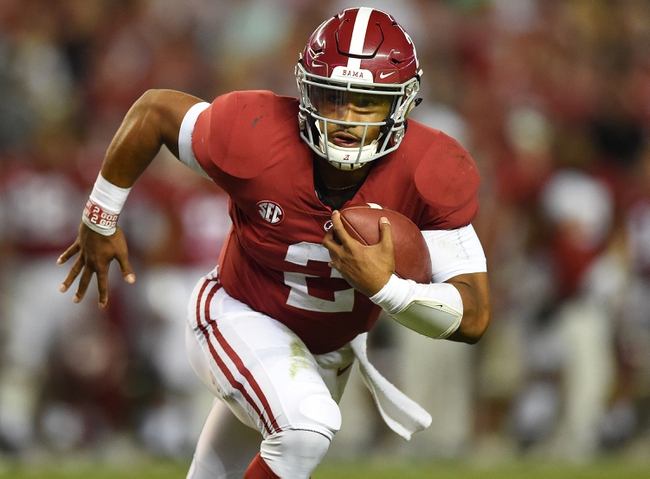 The Alabama Crimson Tide and the Tennessee Volunteers meet in week 8 SEC conference action from Neyland Stadium in Knoxville on Saturday afternoon.

The Alabama Crimson Tide will look for another win to remain undefeated at the top of the college football ranks after improving to 7-0 with a 39-10 win over Missouri in their last outing. Tua Tagovailoa has thrown for 1,760 yards and 21 touchdowns on 71.5% passing this season while Najee Harris and Damien Harris have combined to rush for 862 yards and 4 touchdowns apiece. Jerry Jeudy leads the Tide with 26 catches for 705 yards and 9 touchdowns, while Henry Ruggs III had 6 TD grabs and Devonta Smith, Jaylen Waddle and Irv Smith Jr. each have 300+ receiving yards this season. As a team, Alabama is averaging the most total yards per game and points per game with 567 yards of total offense and 53.6 points per game while owning the 5th-most passing yardage per game with 350.3 yards per contest this season. The Tide are also getting it done defensively, sitting 7th in the country in scoring defense, allowing just 15.1 points per game this season.

The Tennessee Volunteers will look for another huge upset after getting back to .500 with a 30-24 upset victory over Auburn in their last outing. Jarrett Guarantano has thrown for 1,129 yards, 6 touchdowns and 2 interceptions on 64% passing while Ty Chandler has rushed for a team-high 297 yards and Madre London has 3 rushing touchdowns. Marquez Callaway leads the Vols in receiving with 19 catches for 308 yards while Jauan Jennings and Ty Chandler each have a pair of receiving touchdowns this season. As a team, Tennessee is averaging 367.2 yards of total offense and 26.7 points per game this season.

I’m not sure what to make of Alabama from a betting standpoint anymore. Yes they’re the best team in the country right now, but it seems like when I back them, they don’t cover, when I don’t back them, they blow out their opponent. When I go over it goes under. Tennessee looked good against Auburn but the Vols haven’t been anything to write home about as a whole this season, and Alabama has had a ton of success ATS in this matchup. With that said, I'm seeing that Tua Tagovailoa may not go in this one and even if Jalen Hurts has to start, he's taken down Tennessee by a combined margin of 94-17 in the last two meetings so while they've been my achilles this season, I'll lay the points with Alabama here as I just don't think Tennessee is on the covering level just yet.