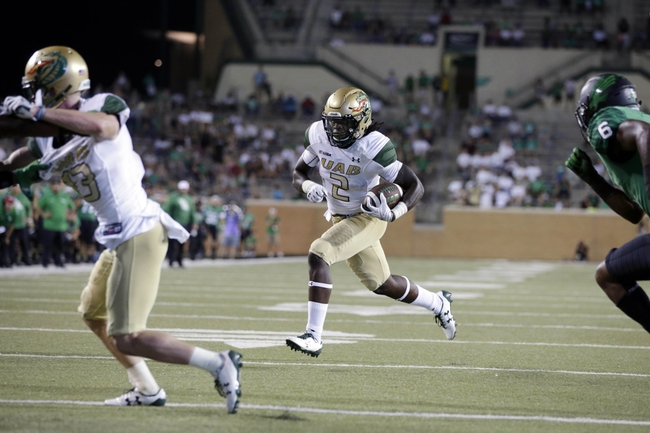 The North Texas Mean Green and the UAB Blazers meet in a week 8 C-USA college football matchup from Legion Field on Saturday evening.

The North Texas Mean Green will look to build on back-to-back wins following a 30-7 win over Southern Miss in their last outing. Mason Fine has thrown for 2,210 yards, 16 touchdowns and 1 interception on 64.7% passing this season while Loren Easly has rushed for 386 yards and 4 TDs and Deandre Torrey has 293 rushing yards and 7 touchdowns this season. Rico Bussey Jr. leads the Mean Green with 45 receptions for 573 yards and 8 TDs, while Jalen Guyton has 31 receptions for 470 yards this season. As a team, North Texas is averaging 479.3 yards of total offense per game, including the 9th-most passing yards per game with 323.3 yards per contest to go along with 39.9 points per game. The Mean Green are also stout against the run, allowing just 97 rushing yards per game, the 7th-fewest in all of FBS.

The UAB Blazers will look to build on their current 4 game winning streak following a 42-0 rout of Rice in their last outing. A.J. Erdely has thrown for 1,181 yards, 7 touchdowns and 5 interceptions on 56.5% passing while rushing for another 5 touchdowns. Spencer Brown leads the Blazers with 491 rushing yards and 7 rushing TDs, while Xavier Ubosi has 335 receiving yards and 3 touchdowns and Collin Lisa has a UAB-high 19 receptions this season. As a team, UAB is averaging 435.2 yards of total offense and 34.2 points per game. The Blazers also rank top-10 nationally defensively in terms of total yardage against (283.8 YPG/6th), passing yardage against (134.5/3rd) and scoring defense (14.2 PPG/5th) this season.

With this line being so low, it’s essentially a pick ‘em game and with that said, this game is going to be the old style offense vs. defense battle for tops in the C-USA West division. I trust the North Texas offense more than I do UAB’s, but the fact is that as good as the Mean Green are, they had a few close calls in games that should’ve been relatively easy like a 3-point win against UTEP. UAB has allowed 14 points over their last 3 games and get to return home where they’ve been pretty much money ATS dating back to last season, so I’ll lay the point with UAB but this a game that’s better to watch rather than try to bet.