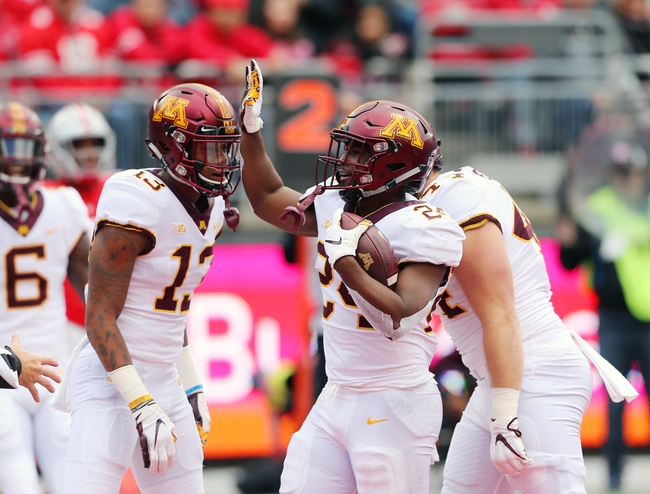 The Indiana Hoosiers could use a win here to get a game above a .500 record after losing four of their last five games. The Indiana Hoosiers have lost five of their last eight road games. Peyton Ramsey is completing 68.5 percent of his passes for 1,860 yards, 13 touchdowns and eight interceptions. Ramsey has two or more touchdown passes in five of his last nine games. Nick Westbrook and Donavan Hale have combined for 604 receiving yards and six touchdowns while Ty Fryfogle has 22 receptions. The Indiana Hoosiers ground game is averaging 159 yards per contest, and Stevie Scott leads the way with 695 yards and six touchdowns. Defensively, Indiana is allowing 28.8 points and 389.3 yards per game. Dameon Willis Jr. leads the Indiana Hoosiers with 42 tackles, Marcelino Ball has 2.5 sacks and Bryant Fitzgerald has two interceptions.

The Minnesota Golden Gophers have really fallen off over the last month and are now dealing with a questionable Zack Annexstad, which obviously doesn't help things. The Indiana Hoosiers haven't had much success recently either, but they've been in most of their games this season and are coming off a game in which they could have easily beat Penn State as double-digit underdogs. Indiana has been much more consistent and has done a good job the last couple of years beating up on the teams they're supposed to beat up on. I'll eat the reasonable chalk with the Hoosiers on the road.