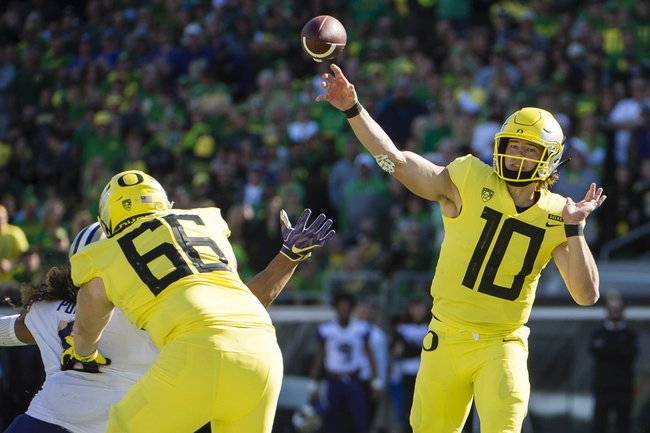 The 19th ranked Oregon Ducks will travel to Arizona Stadium to take on the Arizona Wildcats this upcoming Saturday night in College Football action.

Oregon has to be disappointed with their performance against Washington State however, this is still a very talented football team with one of the best QB’s in the country in Justin Herbert. Arizona has had a disappointing first season under Kevin Sumlin and have really struggled on the defensive end as they rank just 105th in total defense. Arizona needs to have success in their running game to stand a chance, however, it might be hard for the Wildcats to find success agianst the Ducks who rank 23rd in rush defense and as I don’t really think it matters who Arizona has behind center, I think Oregon won’t have a hard time getting a victory in this one as they should be able to put up plenty of points agianst the Wildcats defense. The line has yet to be released due to the uncertain status of Khalil Tate, however, I’m most likely taking Oregon to cover what should be a mid-range to large spread.

The pick in this article is the opinion of the writer, not a Sports Chat Place site consensus.
Previous Pick
Oklahoma State vs. Texas - 10/27/18 College Football Pick, Odds, and Prediction
Next Pick
College Football Picks and Odds Podcast Week 9 2018: Sports Pick Info The TV Games