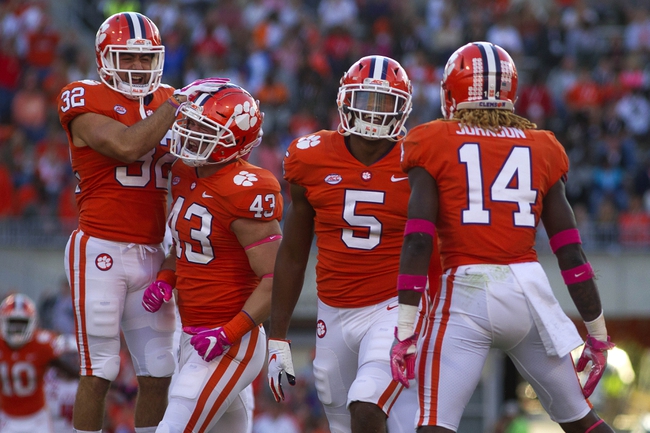 The Clemson Tigers will take on the Florida State Seminoles in a big ACC college football matchup from Doak Campbell Stadium on Saturday.

In the Wolfpack game, Clemson QB Trevor Lawrence put up 308 yards and a TD, and Travis Etienne logged three touchdowns with 39 yards on 15 carries on the ground. Tee Higgins was the top Tigers receiver with his 119 yards and one TD.

Over on the Florida State side, they’re 4-3 this season. The Seminoles’ losses have come to Virginia Tech, Syracuse and Miami (FL), but otherwise they’ve beaten Samford, Northern IL, Louisville and Wake Forest.

In the Deacons game, Florida State QB Deondre Francois put up 353 yards and two touchdowns, while Cam Akers led the rush on 98 yards and two TDs. Leading the Seminoles receivers was Nyqwan Murray with eight grabs for 131 yards and a score.

Well, the big Clemson matchup with NC State this past weekend turned out to be a dud, as the Tigers rolled to a 41-7 victory that was never really in question. Thus far, Clemson has only two games (Texas A&M and Syracuse) that could be considered anything but complete blowouts.

Florida State is certainly capable of putting up some points though, and may be able to hang around for a while. Ultimately however, I like Clemson to keep it rolling here and cover.