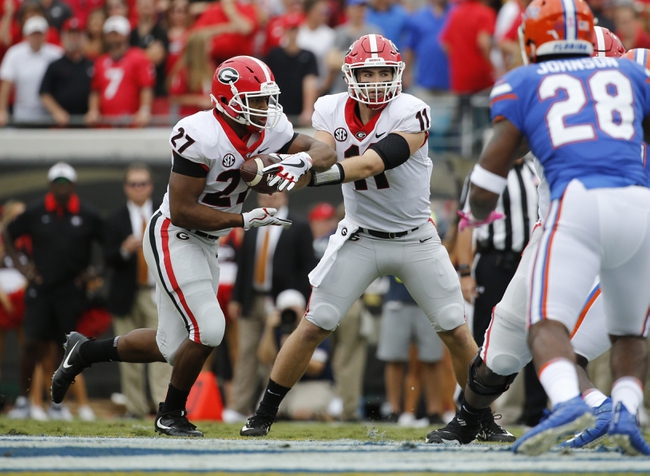 The Florida Gators look to build on their five-game winning streak to remain in the SEC and college football playoff conversations. The Florida Gators have split their last eight non-home games. Feleipe Franks is completing 56.6 percent of his passes for 1,406 yards, 15 touchdowns and five interceptions. Franks has two or more touchdown passes in seven of his last nine games. Van Jefferson and Freddie Swain have combined for 490 receiving yards and eight touchdowns while Josh Hammond has 10 receptions. The Florida Gators ground game is averaging 197.2 yards per contest, and Jordan Scarlett leads the way with 381 yards and three touchdowns. Defensively, Florida is allowing 16.6 points and 323.3 yards per game. Vosean Joseph leads the Florida Gators with 44 tackles, Jachai Polite has seven sacks and Brad Stewart Jr. has two interceptions.

The Georgia Bulldogs look to build on their five-game winning streak to remain in the SEC and college football playoff conversations. The Georgia Bulldogs have won five of their last seven non-home games. Jake Fromm is completing 66.9 percent of his passes for 1,409 yards, 13 touchdowns and four interceptions. Fromm has two or more touchdown passes in seven of his last 11 games. Mecole Hardman and Riley Ridley have combined for 695 receiving yards and nine touchdowns while Jeremiah Holloman has 11 receptions. The Georgia Bulldogs ground game is averaging 226.2 yards per contest, and Elijah Holyfield leads the way with 488 yards and four touchdowns. Defensively, Georgia is allowing 16.3 points and 310.6 yards per game. Richard LeCounte leads the Georgia Bulldogs with 40 tackles, D'Andre Walker has five sacks and Deandre Baker has two interceptions.

The Florida Gators went from being a defensive team that had to grind out games to finding some consistent offense and outscoring teams by 17.8 points during their five-game winning streak. The Georgia Bulldogs were rocked by the LSU Tigers a couple of weeks ago, and you're now forced to question just how good this team is considering only two of their six wins have come against teams with a record above .500. The Florida Gators have failed to cover six of their last nine games when an underdog of at least five points. The Georgia Bulldogs have split their last 12 games ATS when favored by at least five points. Florida has actually won three of the last four games against Georgia, and these games have a history of coming down to the wire. I've been impressed with Florida's improved offense the last few weeks, and if Georgia couldn't do anything against LSU, you have to question what the offense will manage against a just as physical Florida defense. Give me the points.