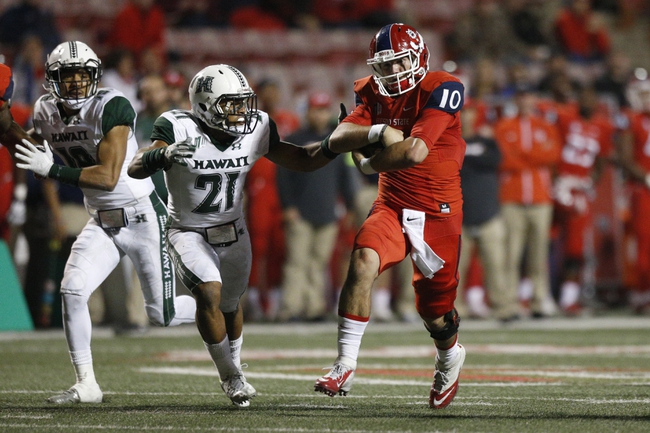 The Hawaii Rainbow Warriors and the Fresno State Bulldogs will be matching up in college football activity on Saturday from Bulldog Stadium.

Hawaii comes in here with a 6-3 record overall. The Warriors’ wins have come against Colorado State, Navy, Rice, Duquesne and Wyoming while they’ve fallen to Army, BYU and Nevada.

In the Nevada game, Hawaii QB Cole McDonald put up 259 yards with three scores, and Dayton Furuta logged 55 yards on 16 carries. John Ursua put up 123 yards and a TD on seven catches to lead the Warriors receivers.

Over on the Fresno State side, they’re sitting at 6-1 this season. The Bulldogs’ lone blemish came against Minnesota early in the year, but otherwise they’ve dispatched Idaho, UCLA, Toledo, Nevada, Wyoming and New Mexico.

In the New Mexico game, Fresno State QB Marcus McMaryion logged 280 yards with three TDs and Ronnie Rivers led the rush on 11 carries for 48 yards and two scores. Tops in receiving for the Bulldogs was KeeSean Johnson with 149 yards and two TDs off eight catches.

Hawaii is currently bogged down beneath two consecutive losses, and though they’ve scored 45 points combined in those games, they’ve given up a whopping 89 on the other side. The Warriors have coughed up at least 40 points in three of their last four.

As for Fresno State, they really haven’t been tested too much aside from that Minnesota game, and for the most part they’re blowing people out.

I’m going to stay on the Bulldog bandwagon and take them to cover.

The pick in this article is the opinion of the writer, not a Sports Chat Place site consensus.
Previous Pick
Oklahoma State vs. Texas - 10/27/18 College Football Pick, Odds, and Prediction
Next Pick
College Football Picks and Odds Podcast Week 9 2018: Sports Pick Info The TV Games