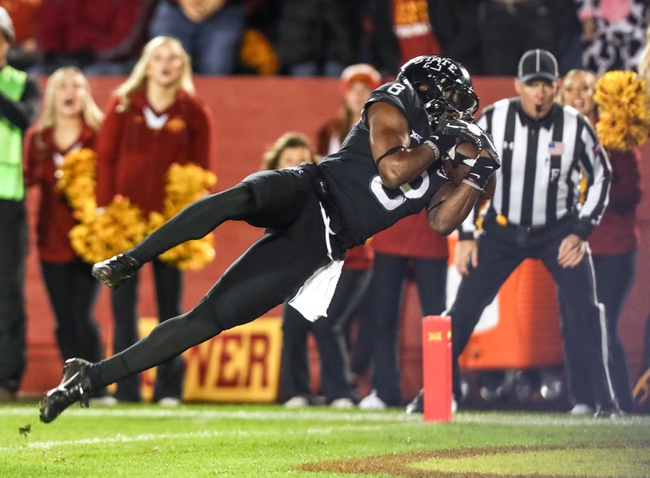 The Texas Tech Red Raiders jumped to a 24-3 lead at the half versus visiting Kansas and cruised to a 48-16 victory as a 17 point home favorite. Texas Tech racked up 533 yards and gave the ball away three times which overcame the Jayhawks 308 yards and two giveaways.

Alex Bowman led a dominant Red Raiders passing attack as he completed 36-46 for 408 yards and three touchdowns against an interception while Jett Duffey hit 3-3 for another 33 yards.

Ta’Zhawn Henry topped Texas Tech on the ground with 62 yards on 15 carries with a TD while Demarcus Felton and Tre King scored on 34 yard and 18 yard runs.

Antoine Wesley had a huge receiving night for the Red Raiders with nine catches for 155 yards and a score with TJ Vasher adding five receptions for 79 yards and another touchdown.

The Iowa State Cyclones enter their bye week off back to back upsets after downing West Virginia 30-14 as a 4.5 point home dog. Iowa State owned total yardage 498-152 with balance while dominating possession with 37+ minutes.

Cyclones quarterback Brock Purdy completed 18-25 for 254 yards and three touchdowns  with an interception while running eleven times for 39 yards.

David Montgomery was the Cyclones workhorse on the ground with 189 yards and a touchdown including a two yard scoring burst. Hakeem Butler topped the Cyclones receiving corps with 107 yards on four receptions with a score.