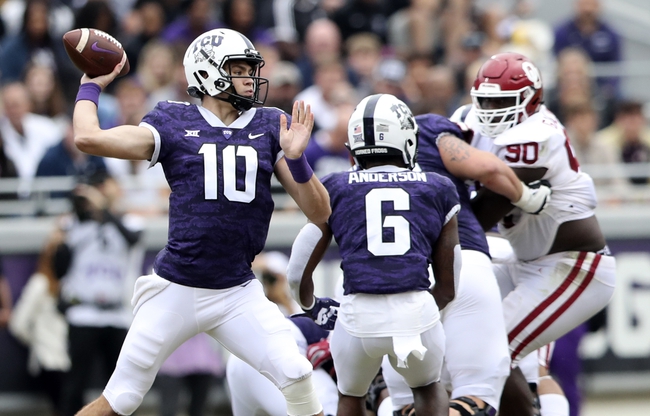 The TCU Horned Frogs will look for a win to get back to .500 after losing 4 of their last 5 games after a 52-27 loss to Oklahoma in their last outing. Shawn Robinson has thrown for 1,326 yards, 9 touchdowns and 8 picks on 60.6% passing while Darius Anderson leads TCU with 387 rushing yards this season. Jalen Reagor leads the Horned Frogs with 37 catches for 457 yards and 4 touchdowns while KaVontae Turpin has 29 catches for 410 yards and 3 touchdowns on the year. As a team, TCU is averaging 394.3 yards of total offense and 28.4 points per game this season.

The Kansas Jayhawks will look for a win to snap a 4 game losing skid following a 48-16 loss to Texas Tech in their last outing. Peyton Bender has thrown for 907 yards, 8 touchdowns and 2 interceptions on 56.4% passing this season while Pooka Williams Jr. has a team-high 604 rushing yards and 4 touchdowns this season. Steven Sims Jr. leads the Jayhawks with 28 catches for 262 yards and 3 touchdowns while Kerr Johnson Jr. has 22 grabs for 238 yards. As a team, Kansas is averaging 341.9 yards of total offense and 26 points per game this season.

I’ve been the first person to rag on the Kansas Jayhawks, as I just don’t think they’re a good football team period. However, TCU hasn’t been in much better form to the points that I want to lay two touchdowns just because. Sure, TCU has had some tough opposition like Oklahoma, Texas Tech, Texas and Ohio State in there, but the Horned Frogs haven’t had much luck in the Jayhawks’ backyard over the years and I think Kansas can keep this one respectable so I’ll take Kansas and the points here.