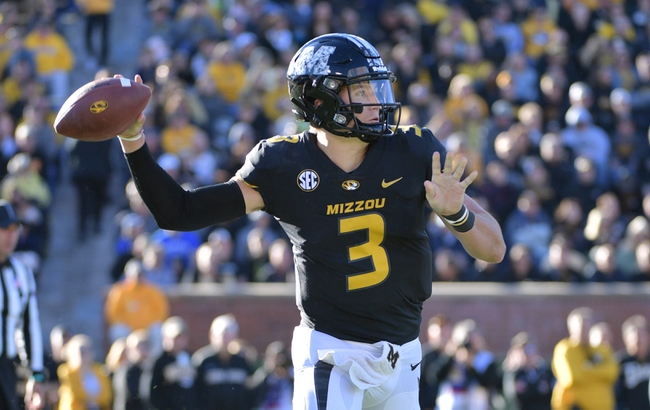 The Kentucky Wildcats and the Missouri Tigers meet in week 9 SEC college football action from Memorial Stadium at Faurot Field on Saturday afternoon.

The Kentucky Wildcats will look to keep their momentum going after improving to 6-1 with a 14-7 win over Vanderbilt in their last outing. Terry Wilson has thrown for 721 yards, 4 touchdowns and 5 interceptions this season while Benny Snell Jr. has rushed for 893 yards and 9 touchdowns for UK this season. Lynn Bowden Jr. leads Kentucky’s receiving corps with 30 catches for 291 yards and 3 touchdowns. As a team, Kentucky is averaging 362.6 yards of total offense and 27.1 points per game while giving up the 2nd-fewest points per game in fBS this season, allowing just 12.9 points per game this season.

The Missouri Tigers will look to build some steam after snapping a 3 game losing streak with a 65-33 win over Memphis in their last outing. Drew Lock has thrown for 1,979 yards, 16 touchdowns and 6 picks on 61.1% passing this season while Larry Rountree III has rushed for 549 yards and 7 touchdowns on the ground this season and Damage Crockett has added 417 rushing yards and 4 touchdowns. Emanuel Hall leads Mizzou with 430 yards and 3 touchdowns receiving while Albert Okwuegbunam has a team-high 37 grabs for 400 yards and 5 touchdowns. As a team, Missouri is averaging 501.1 yards of total offense and 38.6 points per game this season.

Missouri’s offense is one of the best in the country, and Kentucky hasn’t been lighting up the scoreboard lately so I can understand why the Tigers are the favorite, especially at home. However, the Wildcats are solid on defense, and Missouri hasn’t been overly tight defensively. The Wildcats have also been the better team in conference play so far this season, so I’ll take a shot with Kentucky and the points here.