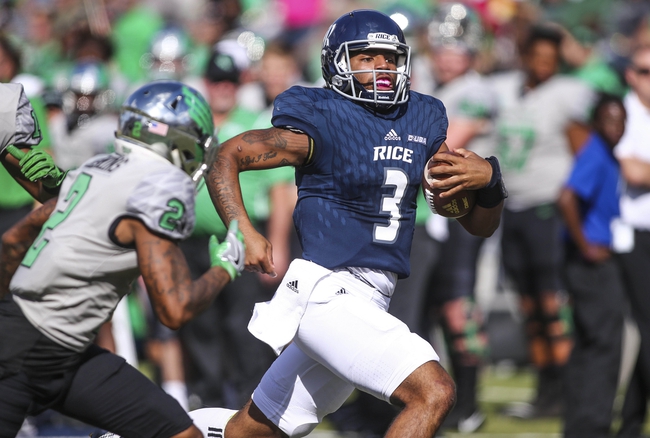 The Rice Owls hope to shake up the CUSA college football standings with a week nine upset of the North Texas Mean Green.

The Rice Owls struggled on both sides of the ball in a 36-17 defeat at Florida International as a 24 point underdog. Rice mustered 240 yards with three turnovers while the Golden Panthers totaled 446 yards with almost 35 minutes of possession.

Owls quarterback Evan Marshman completed 11-15 for 107 yard and an interception while Wiley Green went 1-6 with a pair of interceptions.

Marshman topped Rice on the ground with 68 yards on eleven carries with a pair of trips to the end zone followed by Austin Walter with 36 yards on 15 totes while he caught two passes for 14 yards. Austin Trammell was the Owls best receiving option with five catches for 57 yards.

The North Texas Mean Green saw their chance at a three game winning streak end in a 29-21 loss at Alabama-Birmingham. North Texas held a slight 400-392 yardage edge but couldn’t build on a 21-10 halftime lead.

Deandre Torrey paced a struggling North Texas rushing attack with only 35 yards on 13 and logged three catches for five yards while Jaelon Darden recorded ten receptions for 143 yards and two scores and Rico Bussey Jr. caught six passes for 104 yards for 104 yards and a TD.