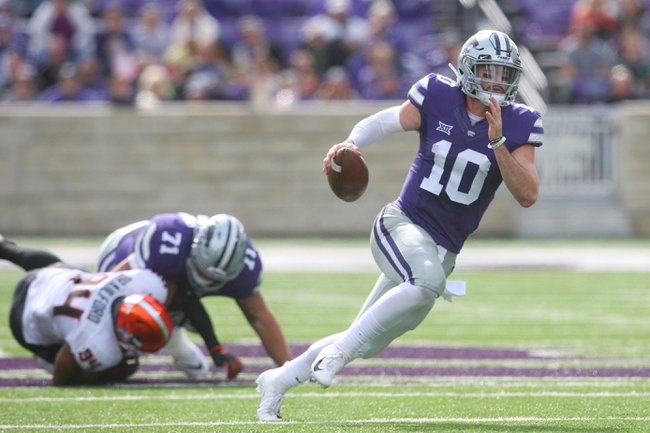 The Kansas State Wildcats ended a three game slide with a 31-12 victory versus Oklahoma State to enter their bye week on a positive note. Kansas State limited the Cowboys to 311 yards and forced two turnovers while totaling 421 yards with almost 38 minutes of possession.

Wildcats quarterback Skylar Thompson connected on 11-22 for 130 yards while running for 80 yards on 12 carries.

Alex Barnes dominated on the ground for Kansas State with 181 yards on 34 touches with four second half touchdowns while also leading the receiving corps with 51 yards on three receptions. Duke Shelley led the Wildcats defensive charge with two interceptions that were returned for a total of 30 yards.

The Oklahoma Sooners bounced back from their loss to Texas by throttling Texas Christian 52-27 as an eight point road favorite. Oklahoma rode a 24-3 second half run to pull away from a close contest while piling up a 542-275 yardage edge.

Sooners quarterback Kyler Murray was deadly efficient through the air, completing 19-24 for 213 yards and four touchdowns while running nine times for 51 yards.

Kennedy Brooks topped the Oklahoma ground game with 168 yards on 18 carries and a 21 yard scoring burst while Trey Sermon totaled 110 yards on 17 touches and a pair of touchdowns. The OU receiving corps saw CeeCee Lamb catch five passes for 91 yards and a TD with Carson Meier snagging a pair of touchdown passes.