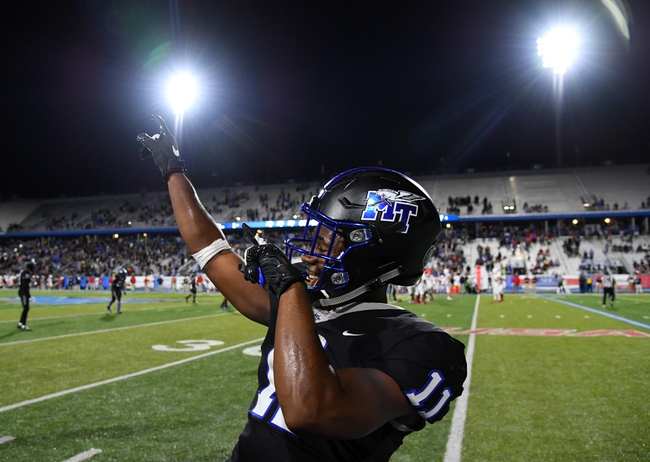 The Old Dominion Monarchs and the Middle Tennessee Blue Raiders will be matching up in college football action Saturday from Foreman Field.

Old Dominion comes in here at 2-6 on the season so far. The losses came to Liberty, FIU, Charlotte, East Carolina, FL Atlantic and Marshall while the Monarchs’ wins came against Virginia Tech and Western Kentucky.

In the WKU game, Old Dominion QB blake LaRussa managed 327 yards with a TD and Kesean Strong was the top rusher on 125 yards and two TDs. Travis Fulgham led the Monarchs receivers with his 102 yards and a TD from seven grabs.

Over on the Middle Tennessee side, they’re sitting at 4-3 so far. The Raiders’ losses have come to Vanderbilt, Georgia and FIU while they’ve taken out TN-Martin, FL Atlantic, Marshall and Charlotte so far.

In the Charlotte win, Middle Tennessee QB Brent Stockstill logged 111 yards with three TDs and a pick, and Tavares Thomas had 36 yards from 10 carries. Ty Lee led the Raiders’ receivers on 60 yards and two TDs from six catches.

Old Dominion has been all over the place this season, and they’re hemorrhaging points on the defensive side. The Monarchs have given up at least 28 points in every game this season.

As for Middle Tennessee, they’ve had some close calls over their last four games, but are 3-1 in that span and seem to be playing well all things considered.

This is a good opportunity for the Raiders offense to hang up some points, so I’m going with Middle Tennessee here.