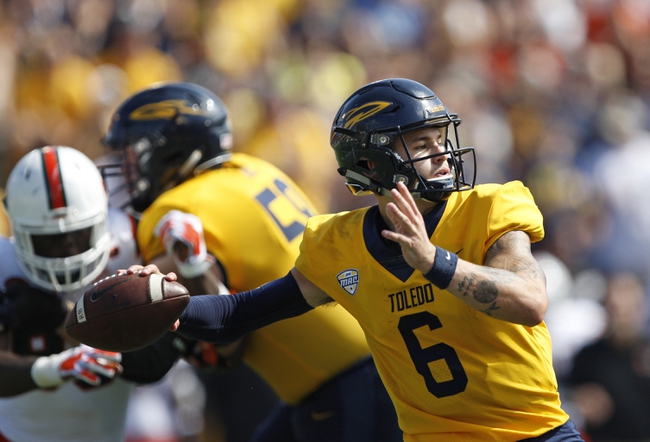 Wednesday college football brings us a matchup between the Ball State Cardinals and the Toledo Rockets.

The Ball State Cardinals had no answers in a 52-14 defeat at Ohio that dropped their record to 3-6 with three games remaining. Ball State gave up 554 yards and mustered just 242 yards with three turnovers and just 21 minutes of possession.

Cardinals starting quarterback Riley Neal connected on 7-15 for 76 yard and a touchdown with Drew Pitt coming in to go 9-17 for 86 yards and an interception.

James Gilbert was the only Cardinals runner of note with 52 yards on nine carries while catching two passes for seven yards while Justin Hall totaled 42 yards on four receptions.

The Toledo Rockets have not been as fearsome as in recent years but certainly looked fearsome in a 51-24 rout of Western Michigan as a touchdown road dog. Toledo won the yardage battle 515-432 with the ability to run and throw.

The Rockets were productive through the air with Mitchell Gaudagni completing 10-18 for 140 yards and a pair of touchdowns while Eli Peters hit 8-14 for 107 yards and another three touchdowns.

Bryant Koback topped Toledo on the ground with 99 yards on ten totes and a TD while three players combined for 156 yards on 20 carries. Cody Thompson caught three scoring passes with Diontae Johnson and Reggie Gilliam catching touchdown passes in a balanced Rockets attack.

Both quarterbacks are listed as questionable so please check back when a line is released.