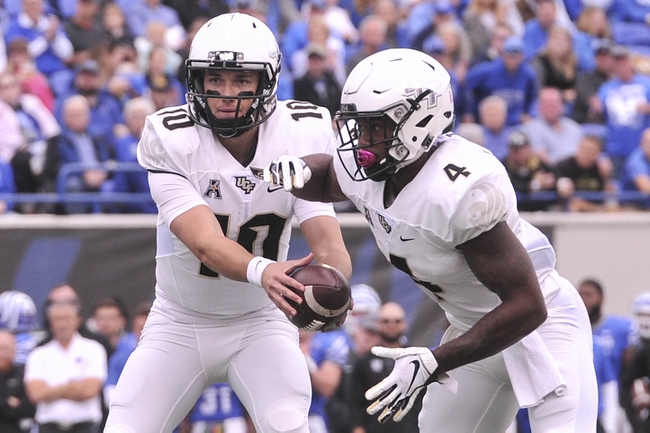 The Temple Owls and UCF Knights meet Thursday in college football action at the Spectrum Stadium.

The Temple Owls look to build on their three-game winning streak to become bowl eligible for a fourth straight season. The Temple Owls have won five of their last seven road games. Anthony Russo is completing 56.5 percent of his passes for 1,410 yards, nine touchdowns and 10 interceptions. Frank Nutile and Russo have combined for 13 touchdown passes and 14 interceptions this season. Ventell Bryant and Branden Mack have combined for 711 receiving yards and five touchdowns while Isaiah Wright has 26 receptions. The Temple Owls ground game is averaging 133.7 yards per contest, and Ryquell Armstead leads the way with 626 yards and six touchdowns. Defensively, Temple is allowing 21.4 points and 330.5 yards per game. Shaun Bradley leads the Temple Owls with 53 tackles, Michael Dogbe has six sacks and Rock Ya-Sin has two interceptions.

The UCF Knights look for another victory, as they still haven’t lost a game since December of 2016. The UCF Knights have won 11 straight home games. McKenzie Milton is completing 59.5 percent of his passes for 1,797 yards, 16 touchdowns and four interceptions. Milton has two or more touchdown passes in 10 of his last 13 games. Gabriel Davis and Tre Nixon have combined for 857 receiving yards and eight touchdowns while Dredrick Snelson has 24 receptions. The UCF Knights ground game is averaging 261.1 yards per contest, and Adrian Killins Jr. leads the way with 429 yards and four touchdowns. Defensively, UCF is allowing 18.1 points and 395.4 yards per game. Richie Grant leads the UCF Knights with 58 tackles, Brendon Hayes has three sacks and Eric Mitchell has one interception.

The Temple Owls have turned their season around lately, as the defense is back to being the physical unit we're used to seeing from this program and the team overall has scored no less than 24 points in their last seven games. Temple has won 18 of its last 24 games when scoring more than 17 points. The UCF Knights are the team that keeps on rolling, but they've allowed teams to hang around at times and may have to play this game either without or a banged up McKenzie Milton. The Temple Owls have covered 12 of their last 16 games when a double-digit underdog. The UCF Knights have covered each of their last four games when a double-digit favorite. The Temple Owls are a physical bunch that is going to bring the fight to UCF and could make this game very interesting if the offense takes care of the football. Give me the points.