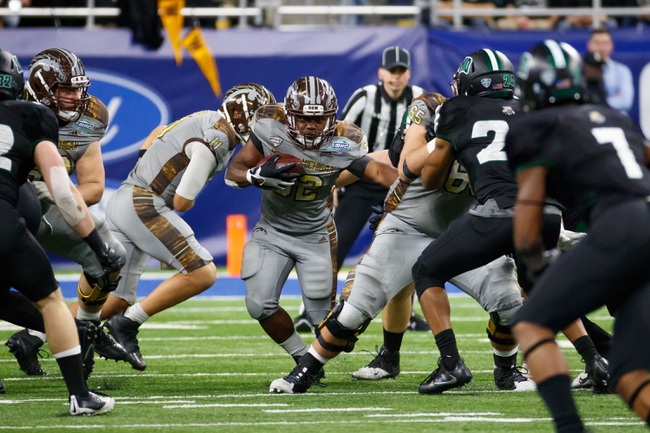 The Ohio Bobcats go on the road to face the Western Michigan Broncos in Thursday night college football.

The Ohio Bobcats continued to play well on both sides of the football after a 52-14 in against Ball State in week nine gave the team victories in four of five. Ohio racked up a 554-242 yardage edge and won the turnover battle 3-1.

Bobcats quarterback Nathan Rourke completed 11-19 for 127 yards with a touchdown and interception while running eight times for 77 yards and a pair of scores.

AJ Ouellette topped a bruising Ohio running game with 135 yards on 13 carries with a pair of trips to the end zone followed by Maleek Irons with 102 yards on 16 totes and two TD’s. Andrew Meyer topped the Bobcats receiving corps with 50 yards and a touchdown on four receptions.

The surging Western Michigan Broncos saw their six game winning streak come to an end in a 51-24 defeat at the hands of visiting Toledo in week nine. Western Michigan was outgained 515-432 and struggled to stop the Rockets on the ground as Toledo ran for 268 yards and a 7.7 yard average per carry.

The Broncos did have success in the air with quarterback Kaleb Eleby connecting on 23-28 for 293 yards and a pair of touchdowns while Jon Wassink was 2-4 for 14 yards.

Jamauri Bogan was the top Western Michigan runner with 66 yards on ten carries and a TD while LeVante Bellamy added 44 yards on nine touches. Jayden Reed was the Broncos top receiving option with six catches for 103 yards and a pair of scoring receptions.