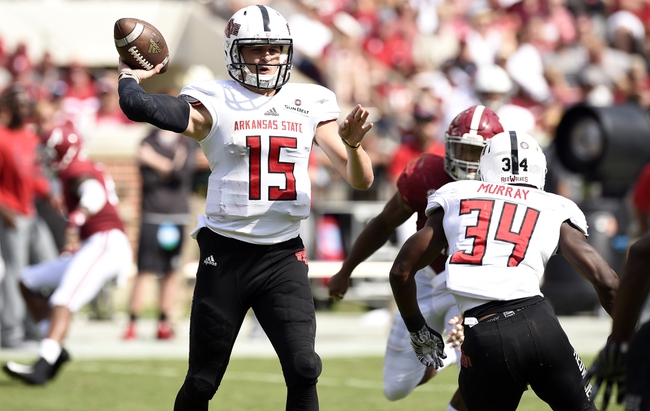 The South Alabama Jaguars need to win their final four games to become Bowl eligible following a 38-17 loss to Troy on Tuesday. South Alabama was outgained 410-385 and lost the turnover battle 3-2.

Jaguars quarterback Evan Orth connected on  18-29 for 275 yards and a pair of touchdowns and three costly interceptions while running nine times for a loss of 22 yards.

Tra Minter was the only South Alabama runner of note with99 yard on 23 carries while catching two passes for 49 yards. Jamarius Way and Jordan McCray topped the Jaguars receiving corps with touchdown receptions of 31 yards and 16 yards respectively.

The Arkansas State Red Wolves haven’t been as fearsome as in past years and need to get back in the Bowl hunt following a 47-43 loss to UL Lafayette as a three road favorite in week nine. Arkansas State was outgained 547-478 with little defense played by either team.

Red Wolves quarterback Justice Hansen connected on 17-30 for 270 yards with a touchdown and interception while running 16 times for 53 yards and another score.

Marcel Murray led Arkansas State on the ground with 121 yards on 19 carries with three touchdowns while Kirk Merritt made four receptions for 122 yards and a TD.