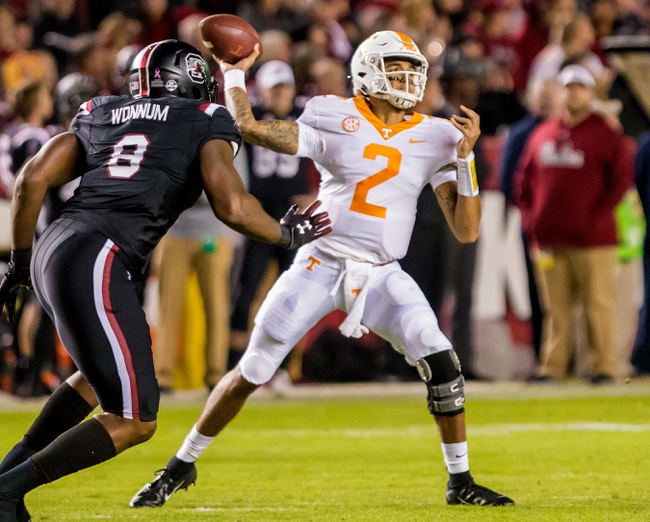 The Charlotte 49ers and the Tennessee Volunteers meet in a week 10 non-conference college football matchup from Neyland Stadium on Saturday afternoon.

The Charlotte 49ers will look for their first road win of the season to get back above .500 after improving to 4-4 with a 20-17 win over Southern Miss in their last outing. Chris Reynolds has thrown for 1,173 yards, 6 touchdowns and 2 interceptions on 64.9% passing this season while Benny LeMay has rushed for a team-high 745 rushing yards and 6 touchdowns this season. Victor Tucker leads the 49ers’ receiving corps with 46 catches for 566 yards and a pair of touchdowns this season. As a team, Charlotte is averaging 340.2 yards of total offense and 22.8 points per game while being tough against the run as well, allowing the 6th-fewest rushing yards per game in the country, giving up just 89.4 per game this season.

The Tennessee Volunteers will look to rebound from losses in 4 of their last 5 games following a 27-24 loss to South Carolina in their last outing. Jarrett Guarantano has thrown for 1,399 yards, 8 touchdowns and 2 interceptions on 64.4% passing while Tim Jordan leads the Vols in rushing with 396 rushing yards and Ty Chandler is right behind with 372 rushing yards this season. Marquez Callaway leads Tennessee’s receiving corps with 394 receiving yards on 28 receptions while Josh Palmer and Jauan Jennings each have 300+ receiving yards this season, with Jennings adding 26 catches and 3 receiving touchdowns this season. As a team, Tennessee is averaging 351.5 yards of total offense and 25.6 points per game this season.

The Volunteers are the better team here, but that doesn’t mean I’m about to go around throwing out these kinds of numbers just because of name recognition. Charlotte isn’t a world-beater by any stretch of the imagination, but Charlotte has enough pieces to keep this one fairly respectable and should be able to keep this one within three touchdowns so I’ll take the points with Charlotte as I just don’t have that much faith in Tennessee.