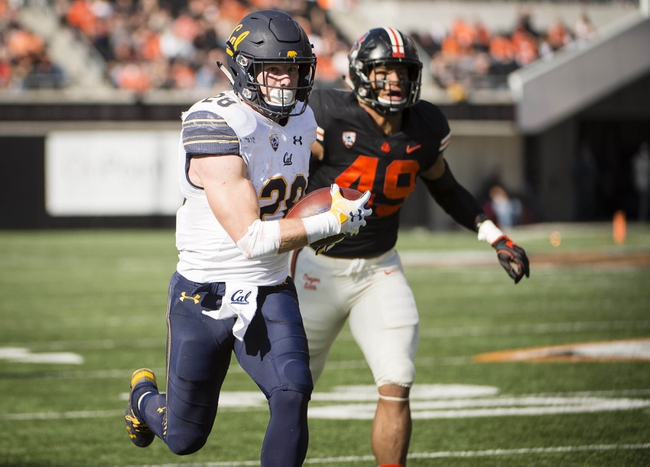 The California Golden Bears will travel to Martin Stadium to take on the 10th ranked Washington State Cougars this Saturday night in College Basketball action.

The California Golden Bears won their 2nd straight game after upsetting the 15th ranked Washington Huskies, 12-10, this past Saturday. In a defensive minded game, California took a 12-7 lead late in the 3rd quarter on an Evan Weaver 37-yard Pick-6 and the Golden Bears defensive came up big in the 4th quarter to help the Golden Bears secure the upset. California was outgained by Washington by a 250-242 margin however, did win the turnover battle by a 2-0 margin in the victory.  Leading the way for the Golden Bears was LB Evan Weaver who not only help California get the lead for good with his pick-6, but also led the Golden Bears in tackles with 11. On the season, California is averaging 24.9 ppg on 392.6 total yards per game (209.0 passing yds/g; 183.6 rushing yds/g). Offensively, California has been led by RB Patrick Laird who has 5 rushing TD’s on the season while averaging 82.5 rushing yds/g on 17.8 att/g. Laird has also been a threat out of the backfield as he has 3 receiving TD’s on the season while averaging 26.6 yds/g on 4.3 rec/g. QB Chase Garbers has completed 66.1% of his passes for 9 TD & 4 INT while averaging 125.7 passing yds/g. The top receivers for the Golden Bears have been Vic Wharton III (4.5 rec/g; 43.4 yds/g), Kanawai Noa (4.0 rec/g; 46.6 yds/g; 2 TD) and Jordon Duncan (2.8 rec/g; 35.0 yds/g; 3 TD). Defensively, California is allowing their opponents to average 22.3 ppg on 312.0 total yards per game (165.5 passing yds/g; 146.5 rushing yds/g).

California has rebounded after a tough three game stretch to win their last two games and has looked great doing it as they held Oregon State & Washington to just 17 combined points. Washington State is having another great season under Mike Leach and come into this game with the 12th ranked scoring offense which is led by the top-ranked passing offense in all of College Football. Washington State has been great ATS this season however, California has the 8th ranked passing defense in the country and as long as they limit their turnovers (committed 14 turnovers during their 3-game losing streak), I think the Golden Bears are a good enough team to cover with the points.

The pick in this article is the opinion of the writer, not a Sports Chat Place site consensus.
Previous Pick
UNLV vs. Fresno State - 11/3/18 College Football Pick, Odds, and Prediction
Next Pick
College Football Picks and Odds Podcast Week 10 2018: Sports Pick Info The TV Games