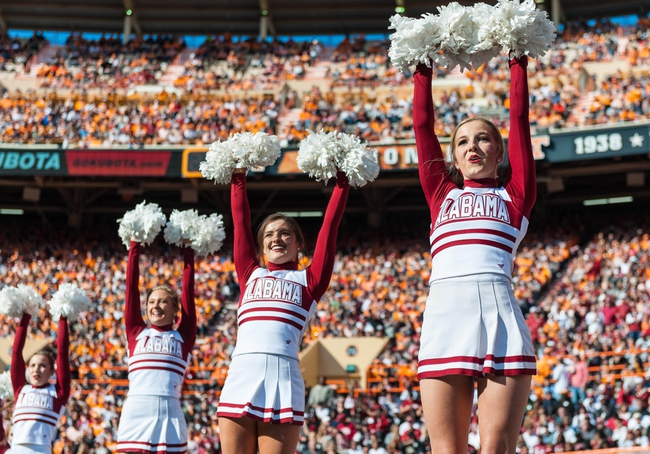 The Mississippi State Bulldogs and the Alabama Crimson Tide will meet up in a big college football showdown Saturday from Bryant-Denny.

Mississippi State enters this game with a 6-3 record so far. The Bulldogs have fallen to LSU, Florida and Kentucky while taking out SFA, Kansas State, LA_Lafayette, Auburn, Texas A&M and LA Tech.

In that last game, MS State QB Nick Fitzgerald logged 243 yards and four scores, and also led the rush on 107 yards from 18 carries. Tops in receiving for the Bulldogs was Deddrick Thomas with 70 yards and a TD on three grabs.

Over on the Alabama side, they’re a juggernaut at 9-0. The Tide has washed away Louisville, Arkansas State, Mississippi, Texas A&M, LA-Lafayette, Arkansas, Missouri, Tennessee and LSU this year.

In the LSU game, Tide QB Tua Tagovailoa managed 295 yards with two TDs and a pick, and Damien Harris logged 107 yards and a score on the ground. Jerry Jeudy put up eight grabs for 103 yards to lead the Tide receivers.

Alabama is going to have all their defensive sights set on Fitzgerald, as he was pretty much involved in everything during their last game. It’ll be tough going, as the Tide simply don’t give up points. Alabama held LSU scoreless, and even though Tennessee put up 21 on them, the Tide drilled the scoreboard with 58 points.

The line on this one is really thick, but given Alabama’s capabilities I can’t pick against them.