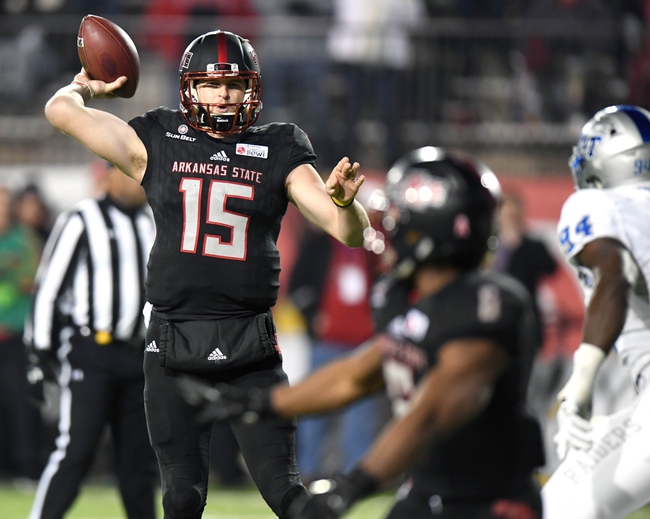 Week eleven college football brings us a bout between the Arkansas State Red Wolves and the Coastal Carolina Chanticleers.

The Arkansas State Red Wolves won’t be winning the Sun Belt but the team is close being Bowl eligible following a 38-14 win against South Alabama in week ten. Arkansas State was dominant on both sides of the football with a 509-260 edge in yards behind a potent passing attack.

Red Wolves quarterback Justice Hansen connected on 26-37 for 332 yards and three touchdowns while running for another 25 yards and a score on six carries.

Warren Wand was the top ASU runner with 77 yards and a trip to the end zone on 16 totes while catching three passes for 23 yards. Justin McInnis was the Red Wolves top receiving option with 177 yards on seven catches and a TD followed by Kirk Merritt with six receptions for 63 yards and another score.

The Coastal Carolina Chanticleers are trying to close in on their first ever Bowl invitation but took a step back from that goal in a 23-7 loss to visiting Appalachian State on Saturday. Coastal Carolina was outgained 405-178 and turned the ball over once while giving up a safety.

Chanticleers quarterback Fred Payton completed 10-16 for 79 yards and an interception with five rushing yards on nine totes while Kilton Anderson hit 4-10 for 27 yards while topping the running game with 22 yards on three carries.