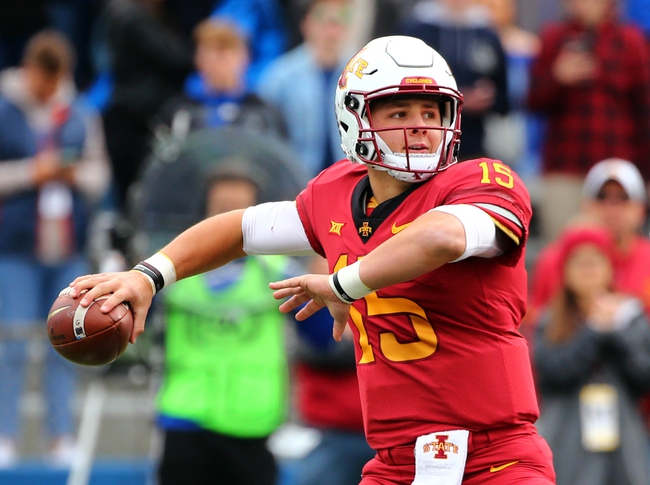 The Baylor Bears will travel to Jack Trice Stadium to take on the 24th ranked Iowa State Cyclones this upcoming Saturday afternoon in College Football action.

The 24th ranked Iowa State Cyclones won their 4th straight game and improved to 5-3 (4-2 Big 12) on the season after defeating the Kansas Jayhawks, 27-3, this past Saturday. Iowa State dominated this game from start to finish and had no trouble securing the victory after taking a 17-0 lead early in the 2nd quarter. Iowa State outgained Kansas by a 394-332 margin and didn’t commit a turnover in the victory. Leading the way for the Cyclones was WR Hakeem Butler who had 164 receiving yards and 2 TD’s on 5 receptions. On the season, Iowa State is averaging 26.9 ppg on 372.1 total yards per game (242.9 passing yds/g; 129.3 rushing yds/g). Offensively, Iowa State has been led by QB Brock Purdy who has been outstanding since taking over the starting duties 4 weeks ago as the freshman has completed 66.3% of his passes for 12 TD & 2 INT while averaging 217.0 passing yds/g. Purdy and the Cyclones have an outstanding WR group led by Hakeem Butler (4.1 rec/g; 98.9 yds/g; 8 TD), Tarique Milton (3.4 rec/g; 39.8 yds/g; TD), and Deshaunte Jones (3.9 rec/g; 32.9 yds/g; 2 TD). Leading the way for the Cyclones backfield has been David Montgomery who had 6 rushing TD’s on the season while averaging 101.7 rushing yds/g on 22.6 att/g. Defensively, Iowa State is holding their opponents to average of 21.3 ppg on 324.4 total yards per game (219.5 passing yds/g; 104.9 rushing yds/g).

Baylor is a much improved team from what we saw last season and should come into this game has a great passing attack, led by Charlie Brewer, that ranks 22nd in the country. Iowa State is playing their best football of the season as not only their offense looks outstanding with Brock Purdy under center, their defense has also been solid as they rank 27th in the country in scoring defense. This is a lot of points to give a Baylor team that can do damage in the air, however, Iowa State is a very difficult team to play when their at home and as I think their offense will have their way with a Baylor defense that ranks 104th in scoring defense, I’m taking the Cyclones to cover this large spread.