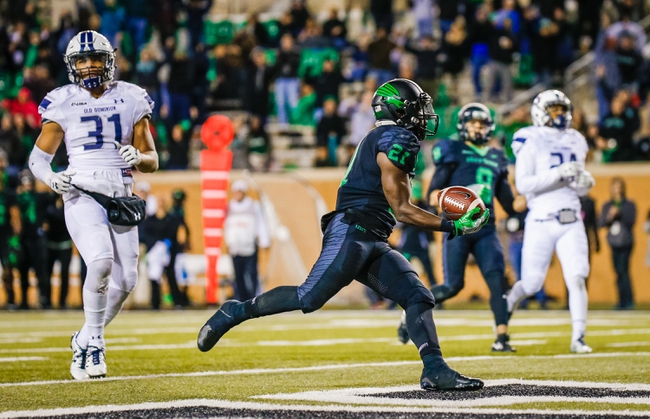 The Old Dominion Monarchs and the North Texas Mean Green will be matching up at Foreman Field in college football activity on Saturday.

Old Dominion enters this one at 2-7 on the season. Aside from wins over Virginia Tech and Western Kentucky, the Monarchs have fallen to Liberty, FIU, Charlotte, East Carolina, FL Atlantic, Marshall and Middle Tennessee.

In the Middle TN game, ODU QB Blake LaRussa put up 333 yards with two TDs and two picks, and Kesean Strong led the rush on 108 yards. Travis Fulgham had a great day with 215 yards and one TD off 10 grabs.

Over on the North Texas side, they’re 7-2 this season. The Mean Green fell to LA Tech and UAB but otherwise have taken out SMU, Incarnate Word, Arkansas, Liberty, UTEP, Southern Miss and Rice.

In the Owls game, North Texas QB Mason Fine logged 333 yards with two scores, and DeAndre Torrey put up 130 yards and three TDs on the ground. Rico Bussey had a nice game for the Green with 145 yards and a score on his four catches.

It’s a little tough to watch Old Dominion this year. Just when they put up a solid game and look like they’re turning a corner they take a step back—just like they did in the 51-17 beatdown in their last appearance.

As for the Green, they’ve had their troubles here and there this season as well but overall they look like a much more complete football team. I’m going to go with North Texas to cover here.