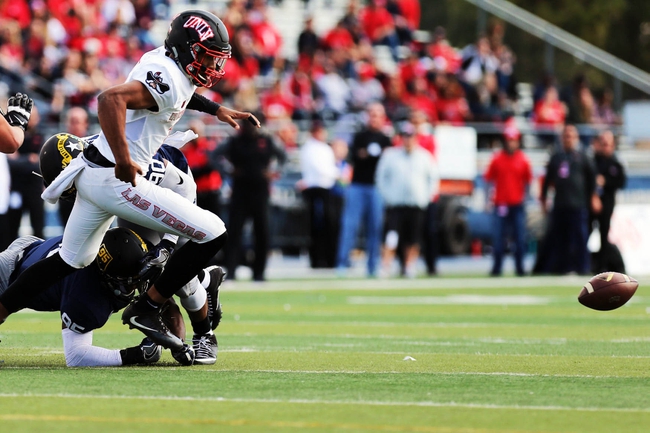 The UNLV Rebels are looking for a change in momentum and didn’t find it in a 48-3 loss to visiting Fresno State Saturday that has the team staring at a six game slide. UNLV managed 302 yards and gave up 466 yards and fell behind early with not enough firepower to make a comeback.

The Rebels needed a viable passing attack and struggled with quarterback Max Gilliam connecting on 14-30 for 98 yards and an interception while Kenyon Oblad hit 1-5 for seven yards.

The UNLV rushing attack was a positive with Charles Williams rumbling for a contest high 121 yards on 16 carries while catching a two yard pass. Brandon Presley was the lone Rebels receiver of note with four receptions for 48 yards.

The San Diego State Aztecs don’t always dominate the opposition but the team is winning with a 7-2 record after upending New Mexico 31-23 in week ten as a 13 point road favorite. San Diego State won the battle of real estate 401-142 but New Mexico held a 3-1 edge in turnovers.

Christian Chapman led an efficient air game connecting 13-19 for 192 yards and a touchdown with Ryan Agnew completing 4-6 for 58 yards and running for six yards.

Juwan Washington topped the Aztecs ground game with 95 yards on eleven carries and a pair of trips to the end zone.  Tim Wilson Jr. and Kahale Warring were the top SDSU receiving options with a combined eight receptions for 124 yards with Warring scoring.