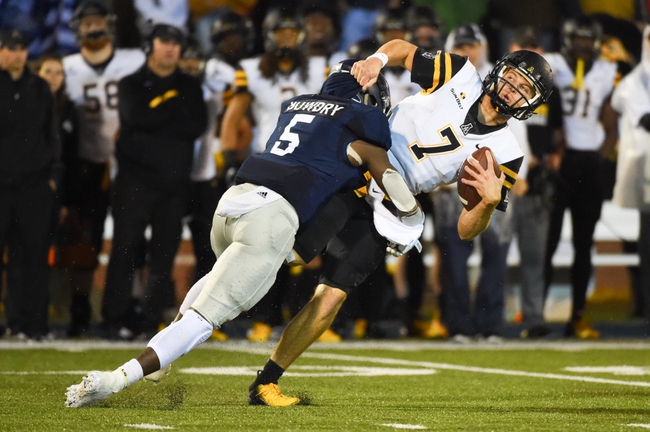 The Appalachian State Mountaineers bounced back from their first conference loss to down Coastal Carolina 23-7 on the road Saturday. Appalachian State totaled 405 yards with a pair of turnovers while allowing 178 yards and forcing a turnover as well as logging a safety.

Mountaineers quarterback Jacob Huesman struggled throughout completing 9-19 for 127 yards and a touchdown along with a pair of interceptions including a pick six.

Appalachian State did plenty of damage on the ground with Darrynton Evans leading the way with 159 yards and a TD on 27 carries followed by Marcus Williams Jr. with 103 yards and another touchdown on 19 totes.

Dominique Heath was the only Mountaineers receiver to catch more then one pass with four receptions for 55 yards while Corey Xavier Sutton caught a 33 yard scoring toss.

The Texas State Bobcats can become Bowl eligible with a sweep of their schedule and might be heading in that direction after downing Georgia State 40-31 for back to back wins. Texas State held a 489-445 edge in yardage and forced two turnovers while playing error football.

Willie Jones III led a potent Bobcats passing attack connecting on 21-26 for 325 yards and a pair of touchdowns while totaling 62 yards  and a touchdown on the ground on 14 carries.

Caleb Twyford gave Texas State a solid effort on the ground with 73 yards on eight attempts with a trip to the end zone while Jeremiah Haydel caught a pair of passes including a 93 yard scoring strike.

I'm not really in to betting his because I don't know if injured Appalachian State players ae available...