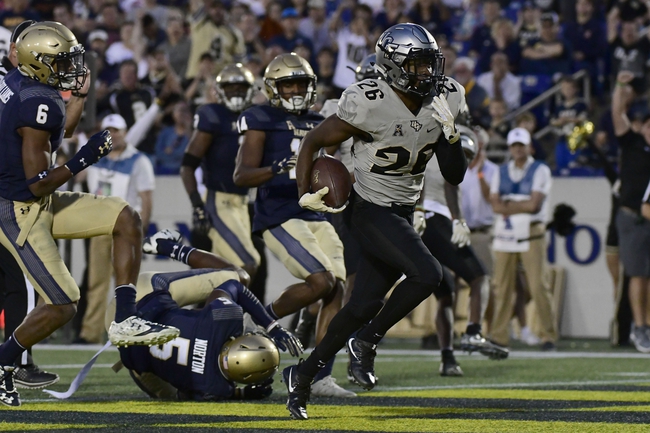 The UCF Knights look for their ninth win of the season while remaining in the college football playoff conversations. The UCF Knights haven’t lost a home game since December of 2016. McKenzie Milton is completing 58.4 percent of his passes for 2,109 yards, 19 touchdowns and five interceptions. Milton has two or more touchdown passes in 11 of his last 14 games. Gabriel Davis and Tre Nixon have combined for 959 receiving yards and eight touchdowns while Dredrick Snelson has 27 receptions. The UCF Knights ground game is averaging 268.2 yards per contest, and Greg McCrae leads the way with 572 yards and three touchdowns. Defensively, UCF is allowing 20.9 points and 429.8 yards per game. Richie Grant leads the UCF Knights with 65 tackles, Brendon Hayes has three sacks and Nevelle Clarke has two interceptions.

The Navy Midshipmen continue what has been their worst season in years, and they're coming off their worst loss, a 42-0 defeat to Cincinnati. The UCF Knights are the train that keeps on chugging, but they did have issues with Temple last Thursday and they're only beating teams by 13.3 points in their last three games. The Navy Midshipmen have covered 10 of their last 12 games when an underdog of at least 20 points. The UCF Knights have covered 11 of their last 16 games when a favorite of at least 20 points. I'm not looking to back the Navy Midshipmen as much as the next guy, but they're a tough team to match up against with a little over a week to prepare, and UCF has allowed teams to hang around recently. This line seems a tab bit too big. I'll side with Navy if forced to pick.