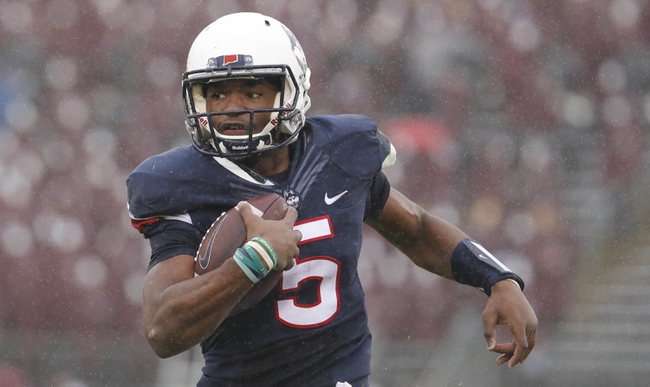 The SMU Mustangs look for another victory after winning four of their last six games to get back to a .500 record. The SMU Mustangs have lost three of their last four road games. William Brown is completing 62.4 percent of his passes for 625 yards, seven touchdowns and one interception. Ben Hicks and William Brown have combined for 22 touchdown passes and five interceptions this season. James Proche and Reggie Roberson Jr. have combined for 1,378 receiving yards and 14 touchdowns while Braeden West has 27 receptions. The SMU Mustangs ground game is averaging 109.4 yards per contest, and West leads the way with 532 yards and five touchdowns. Defensively, SMU is allowing 35.3 points and 414.3 yards per game. Kyran Mitchell leads the SMU Mustangs with 61 tackles, Richard Moore has four sacks and Shaine Hailey has one interception.

The UConn Huskies could use a feel good victory here that would snap a six-game losing streak. The UConn Huskies have lost three of their last four home games. David Pindell is completing 58.8 percent of his passes for 1,502 yards, 11 touchdowns and eight interceptions. Pindell and Marvin Washington have combined for 12 touchdown passes and 11 interceptions this season. Kyle Buss and Aaron McLean have combined for 693 receiving yards and four touchdowns while Hergy Mayala has 28 receptions. The UConn Huskies ground game is averaging 202.7 yards per contest, and Pindell leads the way with 934 yards and eight touchdowns. Defensively, UConn is allowing 47.9 points and 626.9 yards per game. Tyler Coyle leads the UConn Huskies with 82 tackles, Darrian Beavers has four sacks and Oneil Robinson has one interception.

The SMU Mustangs are playing better football after their slow start and are fresh off a big upset win over the Houston Cougars. The UConn Huskies have lost six of their eight games by double digits and remain head and shoulders the worst defensive team in the country. The SMU Mustangs have split their last 10 games ATS when a double-digit favorite. The UConn Huskies have failed to cover six of their last eight games when a double-digit underdog. I'm not sure I want to lay such a big number with SMU on the road, especially with this being a letdown spot after their win over Houston. However, UConn remains a brutal defensive team that hasn't made many strides over the course of the season and almost all of their losses are blowouts. So, I'll lay the points.